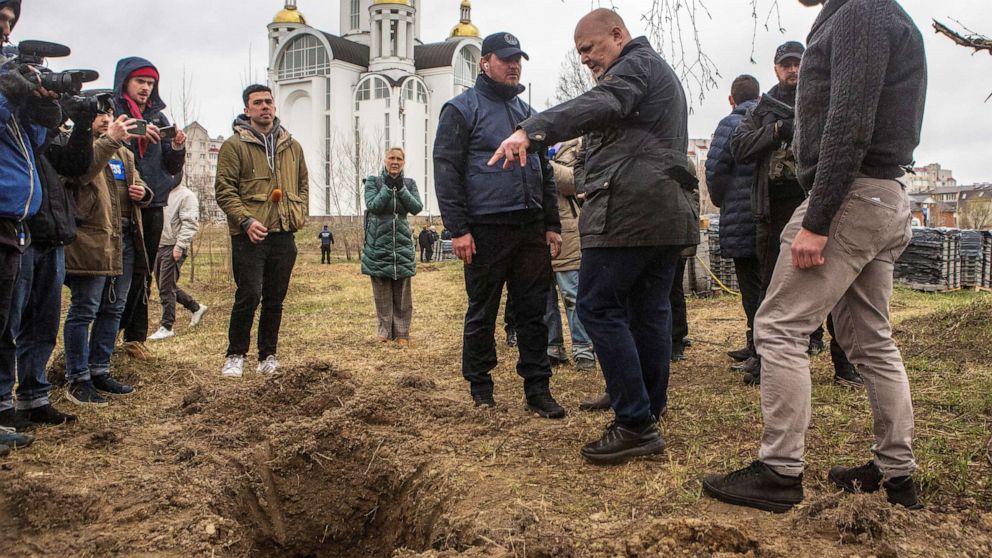 What it takes to prosecute war crimes

As Russian forces retreated from northern Ukraine, atrocities were exposed and the United States and European countries accused Russia of committing war crimes.

Last month, the United States made a formal legal assessment that Russian forces had committed war crimes in Ukraine.

Ukrainian officials said on Friday they found more than 900 civilian bodies in the Kyiv region after Russian forces withdrew, including 350 in the town of Bucha.

Geoffrey Nice, a lawyer who prosecuted former Serbian President Slobodan Milosevic at the International Criminal Tribunal for the former Yugoslavia, told ABC News it was clear war crimes were being committed in Ukraine.

“Without a doubt. It’s clear from everything we watch on television every day,” Nice said.

In March, a few days after the start of the war, the International Criminal Court announced that it was opening an investigation into possible war crimes committed in Ukraine. This story explains what it takes to prosecute war crimes.

What is a war crime?

War crimes are part of the law of armed conflict, which governs fighting during war, and applies to all parties to an armed conflict, including armed forces and organized armed groups. These rules are set out in the Geneva Conventions and their additional protocols.

Individuals could also be held accountable or prosecuted for serious violations of the law of armed conflict or grave breaches of the Geneva Conventions, said Tom Dannenbaum, assistant professor of international law at Tufts University’s Fletcher School of Law and Diplomacy. , to ABC News in an interview.

These violations include attacks on civilians and their structures, murder, cruel, inhuman or degrading treatment, torture or sexual and gender-based crimes, such as rape, according to Dannenbaum.

Jurisdiction and forums for proceedings

There are several instances where war crimes can be prosecuted. In Ukraine, this includes the ICC, national courts and courts of countries with universal jurisdiction.

Ukraine has consented to the jurisdiction of the ICC, which can prosecute four main crimes: genocide; crimes against humanity, including murder, rape, imprisonment, deportation and torture; war crimes that violate the Geneva conventions; and the crime of aggression.

For individuals to be tried by the ICC, they must consent voluntarily or be surrendered to the court. Russia does not recognize the jurisdiction of the ICC and is not required to hand over indicted suspects.

Universal jurisdiction exists in some countries, including Australia, France and Germany, allowing them to prosecute individuals for crimes committed outside their territory. It is not necessary that the individuals be citizens of the prosecuting country and that the crime was committed against its citizens.

“It asserts universal jurisdiction on the grounds that this particular crime is a crime of universal concern,” Dannenbaum said.

The United States does not allow its courts to exercise universal jurisdiction.

According to William Wiley, founder and executive director of the Commission for International Justice and Accountability, who has more than 20 years of experience in international criminal and humanitarian law in the areas of investigation and law, investigators divide evidence into two categories: crime-based evidence and linkage evidence.

“The crime based, for example, in the well-known situation of Bucha, Ukraine, would be the corpses, eyewitnesses to the murder of these individuals,” Wiley said.

Evidence based on criminality represents a small portion of cases; “90% of the work in an international criminal investigation, the prosecution is focused on collecting and analyzing evidence of nexus,” Wiley said.

Investigators will look for “evidence of a connection between those who committed the wrongdoing on the ground and any other actors who may be investigated and prosecuted, particularly those up the chain of command”, Dannenbaum said.

Link evidence may include documents, generated documents, communications, satellite images or internal witnesses. Investigators are looking for evidence that could establish intent.

“What it takes to prosecute a war crime is a lot of evidence because ultimately war crimes cases are brought against high profile perpetrators who need a lot of backing material. and link someone in Moscow to the offenses in, for example, Bucha,” Wiley said.

Nice disagreed and said there was no need for a huge amount of evidence.

The war “has been associated with war crimes from the start. There was never any doubt about that,” Nice said.

He added: “You don’t necessarily have to have a huge amount of evidence because it’s extremely clear.”

Suspects are identified late in the investigation process. Investigators begin by gathering evidence surrounding the structures responsible, then they tie these crimes to a criminal basis, and finally they work to identify suspects, Wiley said.

“At the end of the day, it’s not Russia that’s going to be tried…it’s individual suspects,” Wiley said.

The legal principle of command responsibility states that commanders are responsible for the conduct of their subordinates, Wiley said. It goes all the way up the chain of command, including Russian President Vladimir Putin.

This excludes the possibility of high-ranking officials claiming that they were unaware of the actions committed by their forces.

“For example, in Bucha, it won’t be an effective defense because the Command Responsibility Act requires commanders to be aware, at all times, of what their men are doing,” Wiley said.

Could Russian forces and leaders be prosecuted?

Experts agree that top officials are unlikely to be prosecuted, but Russian forces could be.

There is “a fairly strong prospect” that Russian forces will be brought to justice because a number of them have been captured by Ukraine and because there is “an unprecedented level of international cooperation around gathering evidence, making sure it’s preserved,” Dannenbaum said.

Dannenbaum said countries provide the ICC with additional resources, including financial support and teams of investigators.

Wiley also believes the forces will be continued.

“I don’t think there will be a problem getting some Russian authors to appear in court. The fundamental question is what ranks will they hold or will they have held,” Wiley said.

“However, there are a large number of Russian soldiers and paramilitary personnel linked to the Russian security intelligence services, which have been captured by the Ukrainians,” Wiley said.

But the likelihood that Putin or other senior Russian officials will be prosecuted is not high.

“These people are much less likely to be detained by the courts that would seek to prosecute them. And Putin himself has an added wrinkle, which is a concept called head of state immunity, which makes it difficult for Putin to be prosecuted. in National Courts”, Dannenbaum.

But he could be prosecuted before the ICC.

If there is regime change in Russia, it could be put on trial, Nice said.

“If there is a regime change in Russia, like there was in Serbia, which led to the surrender of the former Serbian president, then he can be judged,” Nice said.

Community Profile: No time to take it easy – from basketball courts to Christmas lights and practice, Mike Picore is taking on a multitude of ways to give back to Glenwood Springs