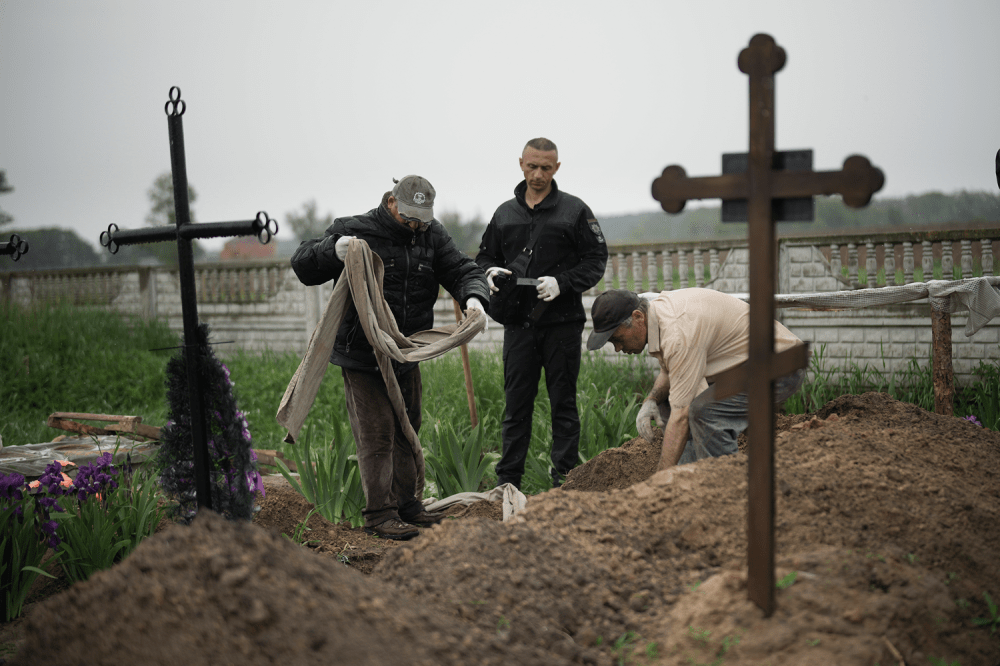 “It is not the right of the international community, which has stood idly by while these crimes are being committed, to forgive,” Aryeh Neierco-founder of Human Rights Watch, wrote in 1993. “After being stripped of virtually everything else, victims have the right to retain at least that right.”

Neier had just returned from Sarajevo, Bosnia and Herzegovina. In Brussels and New York, diplomats were wrestling with a stark choice: pursue a plan for a war crimes tribunal, approved by the UN General Assembly, or forego such a trial to persuade Serbia to conclude a plan full peace with the European Union.

To drop the trial, BiH residents told Neier, would be “treason”, he wrote in the Washington Post. Justice for war crimes, ethnic cleansing and genocide cannot be a “bargaining chip”, he argued.

“It is not the right of the international community, which has stood idly by while these crimes are being committed, to forgive,” Aryeh Neierco-founder of Human Rights Watch, wrote in 1993. “After being stripped of virtually everything else, victims have the right to retain at least that right.”

Neier had just returned from Sarajevo, Bosnia and Herzegovina. In Brussels and New York, diplomats were wrestling with a stark choice: pursue a plan for a war crimes tribunal, approved by the UN General Assembly, or forego such a trial to persuade Serbia to conclude a plan full peace with the European Union.

To drop the trial, BiH residents told Neier, would be “treason”, he wrote in the Washington Post. Justice for war crimes, ethnic cleansing and genocide cannot be a “bargaining chip”, he argued.

The International Criminal Tribunal for the former Yugoslavia began a month later.

It seems almost inconceivable now that those most responsible for the bloodshed and abuse are free. But even as the war ended, it seemed entirely possible that men like paramilitary leader Milan Lukic, military commander Ratko Mladic or former Serbian President Slobodan Milosevic, all responsible for thousands of deaths, would be free.

Today, the world is just beginning to wonder what justice for Russia’s war of aggression in Ukraine might look like.

Ukraine has already begun bringing charges against captured Russian soldiers: its first conviction, of a tank unit sergeant who executed an unarmed civilian, resulted in a conviction in May. This case was relatively straightforward: the sergeant admitted to shooting the Ukrainian, but said he was just following orders. (This so-called Nuremberg Defense is generally not accepted under international law.)

Ukraine’s judiciary simply does not have the capacity to handle the sheer volume of cases expected: then-prosecutor general Iryna Venediktova told the BBC last month that she had received information about some 21,000 war crimes. Even a peacetime Ukraine would be stretched beyond its capacity.

They are not quite alone. The International Criminal Court has established a full investigation team in Ukraine and is actively collecting evidence for possible prosecution. Kyiv filed a lawsuit before the International Court of Justice, accusing Russia of genocide. Another case, albeit largely symbolic, was spear to the European Court of Human Rights. Ukraine’s allies, including the United States and European Unionoffered their support for these war crimes investigations.

But a cohort of international law experts say now is the time to spell out how, exactly, the world intends to investigate and prosecute alleged war crimes in Ukraine.

“As the conflict continues, more and more Russian soldiers, colonels and generals are going to fall into Ukrainian custody,” said Michael Scharf, co-dean of Case Law School. Western Reserve University. Foreign Police. “And while that’s happening, there will be a lot of interest in prosecuting. … I can’t imagine the current Ukrainian justice system can handle that.

Scharf, alongside the Public International Law & Policy Group as well as Ukrainian lawyers, is proposing a structure for the West and Ukraine to effectively and quickly manage this deluge of cases.

A bill drafted by Scharf and others envisions a high war crimes court that is still located in Ukraine and staffed by Ukrainian judges. “What this bill does is internationalize the Ukrainian court,” he said.

This means having international observers, foreign advisers, a security guarantee provided by the West and considerable funding.

At a Public International Law & Policy Group roundtable last week, alongside other proponents of the project, Scharf pointed to a £2.5 million ($3.03 million) grant from the United Kingdom to fund part of the survey work. “They really need 50 times more,” Scharf said.

This proposed tribunal is not entirely designed from scratch: the proposal is modeled on the High Anti-Corruption Court of Ukraine. The judges of the anti-corruption tribunal are all Ukrainians but are vetted before appointment – and aided and advised after they are selected to sit – by a team of international experts.

“Our proposal only has Ukrainian judges,” Scharf said. “There’s a very good reason for that, because their constitution says they can only use national judges.”

This internationalized Ukrainian tribunal would not replace the work of these other international bodies but rather work in tandem with them.

Scharf points out that the International Court of Justice respects the immunity of heads of state and foreign ministers – in 2002 the court struck down a arrest warrant for former Congolese Foreign Minister Abdoulaye Yerodia Ndombasi on the grounds that he was immune from prosecution. The International Criminal Court tends to prosecute more high-ranking individuals: In its nearly 25 years of existence, the court has indicted only a few dozen individuals.

Scharf sees these different bodies operating in conjunction, not in competition, with the Ukrainian court. Decisions on how to distribute cases will likely rest with Ukraine’s prosecutor general.

For example, Scharf said: “The ICC could prosecute those who will not be extradited to Ukraine.

“People want to see this internationalization to avoid the appearance of bias,” said Stephen Rapp, the former US Ambassador at Large for War Crimes Issues, at the Public International Law & Policy roundtable. Group in July.

“If they’re not done to very high standards, if it’s not demonstrated to high international standards…I think it will weaken the support Ukraine has,” Rapp said.

The Nuremberg trials, which prosecuted Nazi war criminals, remain the gold standard for such prosecutions. Although the first trials focused on the top leaders of the Nazi regime, later courts indicted hundreds of senior government officials, business leaders, judges, doctors and soldiers. The prosecutions held responsible those who operated the German state apparatus. The Nuremberg Trials, of course, were made possible only after the defeat of Germany and with the cooperation of the Soviet Union.

Rapp stressed how important it is for the Ukrainian court to fully understand the Russian command structure, the composition of its units and the nature of each unit sent in the invasion. Given the murky nature of the Russian military – which is increasingly dependent on conscripts and quasi-private contractors – this will not be an easy task. Some of these units could be tried together.

Scharf said there are tangible benefits to pursuing those charges now. “You really need the political will to support [a sanctions regime],” he said. “And in the past, indictments have really succeeded in that.” He points to the political pressure put on Milosevic: “They did indict him, and that led him to accept the independence of Kosovo”.

In this light, the indictments themselves could have a strategic advantage, even if the accused will not appear in court. “Just indicting the leaders has eroded their power, their popularity, their positions of authority,” he said.

“The Russians will not hand over any of their indictees,” he conceded. But an Interpol red notice means any of those charged – politicians, military commanders or soldiers – would risk arrest if they left the country. “It will make these people, including [Russian President Vladimir] Putin, prisoners in Russia,” Scharf said.

Russia knows only too well how effective these red notices are: it frequently uses Interpol to track down and harass dissidents abroad.

Although the evidence of war crimes – the wanton execution of civilians, rape as a weapon of war, the bombing of civilian infrastructure and torture – is substantial, it does not mean that the convictions are certain.

Russia has already worked to discredit international judiciaries and is using its own judicial system to begin trying Western fighters volunteering for Ukraine. Ad hoc tribunal even uses pro-Putin Western influencers to peddle questionable and outright talk conspiracy allegations that Kyiv is the aggressor, including the idea that US-funded biological labs in Ukraine are developing biological weapons.

While there is a clear strategic objective to begin these investigations and prosecutions at short notice, the process can be just as critical as the outcome. For more than a century, the international community has been striving to put in place meaningful and binding accountability measures. With each deadly conflict, this infrastructure began to take on a more cohesive and predictable appearance.

Regardless of whom Ukraine and the international community manage to arrest and prosecute, fulfilling the promise made at Nuremberg will be a significant contribution to international law.