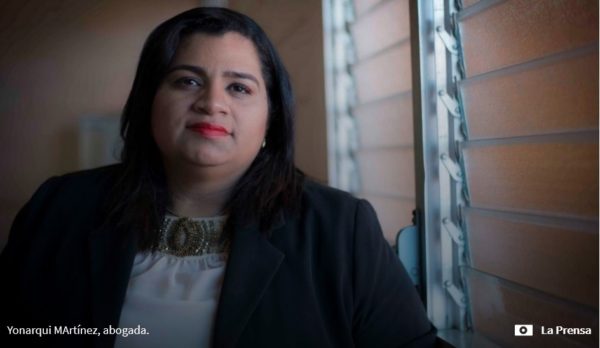 The well-known lawyer says she will continue the work she does as a defense lawyer for more than 40 unjustly imprisoned government opponents.

HAVANA TIMES – Faced with constant threats of arrest, lawyer Yonarqui Martinez has publicly announced that she will no longer talk about political issues. Martinez has made a name for himself defending a large number of political prisoners, including TicToc star Kevin Monzon.

The lawyer said she would continue the work she was doing so far, defending more than 40 political prisoners.

â€œMy work has always focused on defending human rights. I’ve never focused on trying to discredit anyone – neither in my social media nor in my private WhatsApp communications. My messages have always revolved around the release of political prisoners and human rights violations, â€the lawyer told the Nicaraguan online news site. 100% Notice.

She noted that the regime of Daniel Ortega and Rosario Murillo have approved a set of repressive laws that endanger the freedom of Nicaraguan citizens.

â€œSince the adoption of the Cybercrime Law, we have also had Law 1060 (amending the Nicaraguan Code of Criminal Procedure) and Law 1055 (â€œ Law for the Defense of the Right of Peoples to Independence, sovereignty and self-determination for peace â€). Although I try to speak out against the human rights violations that undeniably occur, at some point these [laws] could be used against me, and I could face legal action, â€said the expert.

The lawyer deplored the detention of her colleagues: Maria Oviedo, JosÃ© Pallais and Roger Reyes, the last defense lawyer for the imprisoned presidential candidate FÃ©lix Maradiaga.

â€œThis led me to make the decision not to share with, or contact, people who post things that could compromise me. I ask them not to call me, because I need to continue my work. I continue to give legal advice; I am responsible for the legal proceedings of people deprived of their liberty who are political prisoners. I don’t want to be imprisoned myself, â€she added.

In order to avoid retaliation from the regime, Yonarqui Martinez also asked her friends and the general public to refrain from tagging her in posts that could compromise her freedom.

â€œI’ve tried telling my friends and my Facebook followers that if they post something about what we’re going through, don’t tag me. Obviously, it can harm me in one way or another, and I want to keep working, â€she reiterated.

Martinez, who is the chief defense attorney for some of the political prisoners, said she “constantly” received death threats and threats to be locked up.

Yonarqui Martinez is a daughter, plus mother and guardian of her 4 children.