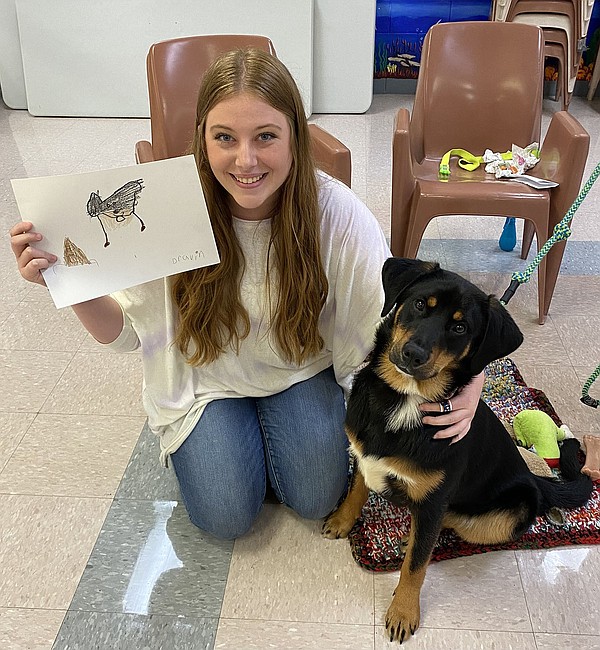 Blaze Cantrell had a clever idea to boost the adoption of rescue dogs.

Cantrell, who was a first-grade teacher at Harrisburg last year, asked her art students in grades three through six to do dog portraits as part of the Arkansas Paws in Prison program to help them make bring these dogs into homes. Cantrell art students spent the last two or three weeks of the 2021-2022 school year creating original artwork based on the dog photos available through the program.

“After I explained the program to them – because they were like, ‘Are the dogs in jail?’ — some of them were super excited to do this,” Cantrell says of the kids in her class. “They have big hearts.

Paws in Prison matches inmates at seven Arkansas correctional facilities with rescued dogs, and inmates teach the dogs obedience skills and help them socialize, making them more likely to be adopted. The program not only reduces the number of dogs euthanized each year, it also helps prisoners involved in rehabilitation and reintegration into their communities, as it gives them a chance to work on their own interaction skills and do something good for their condition.

“My mom is actually the secretary to Unit Director McPherson and I knew about the Paws in Prison program,” she says. “My family worked there and I’ve known the Arkansas Department of Corrections all my life, so when she told me about this program, I was like, ‘This is great for adoptions.’ “

One child drew a picture of a dog in the center of a colorful sunburst, another depicted a dog bigger than the flowers and trees around it, and there was also one enjoying a sunny day on what looks like a farm, with trees and a red barn in the background.

“We took our Chromebooks and I uploaded all the photos of the dogs and assigned a dog to each student,” Cantrell explains.

She shared with them information about how dogs from the Paws in Prison program are adopted, through partner rescue groups that the training program managers work with to ensure that each potential adopter is vetted before they go. bring a dog home. Adoption fees vary, but are usually around $250.

“We talked about the types of dogs the kids would want to adopt and I think a lot of them have gone home and told their parents about the program, so it’s good that more people know about the process. general adoption now because of it.”

When Cantrell hand-delivered the one-of-a-kind Paws in Prison dog artwork to the organization, she got a chance to see some of the training efforts.

“They explained the tricks and how you should train them to eat, hang out, and play with other animals,” Cantrell says. “Watching the inmates interact with the dogs was just awesome. I think it’s a good program for the simple fact that being in prison is a terrible thing anyway. You feel isolated and alone and the fact that that just promotes good behavior because you’ve got to be like an uneventful year to participate, that’s really good.”

Every dog ​​in the Paws in Prison program, Cantrell says, has a record.

“It’s kind of a diary that the inmate trainers keep and they write down stuff the dogs can do, favorite foods they like and different things they’ve observed over the 10 weeks they’ve had the dogs. “, she explains. Newspapers go to homes that adopt dogs.

Cantrell found inspiration for the art project in a TikTok video made by another teacher who asked students to draw pictures of shelter animals.

“I know some people think it’s just dancing or whatever on TikTok, but it’s really a great place for teachers to share ideas,” she says.

She is proud of her students’ willingness to help.

“I asked my students if they wanted a picture of their artwork that I could take or copy for them, but they all donated their artwork, and that artwork is going to be added to the dogs’ portfolios.”

Cantrell’s roommate is in the process of adopting a dog, but she admits she tends towards felines.

Cantrell has moved back to southeast Arkansas, where she grew up, and will be teaching third grade at McGehee in the fall. She will have her own class of around 20 students, rather than pulling students from multiple grades and grades for regular art classes.

She plans to undertake a similar project at her new school and considers the possibility of auctioning off the artwork to raise funds for another organization.

“I definitely think it’s a good thing and I would like to continue,” she said.

More information about Paws in Prison is available at doc.arkansas.gov/correction/paws-in-prison/.