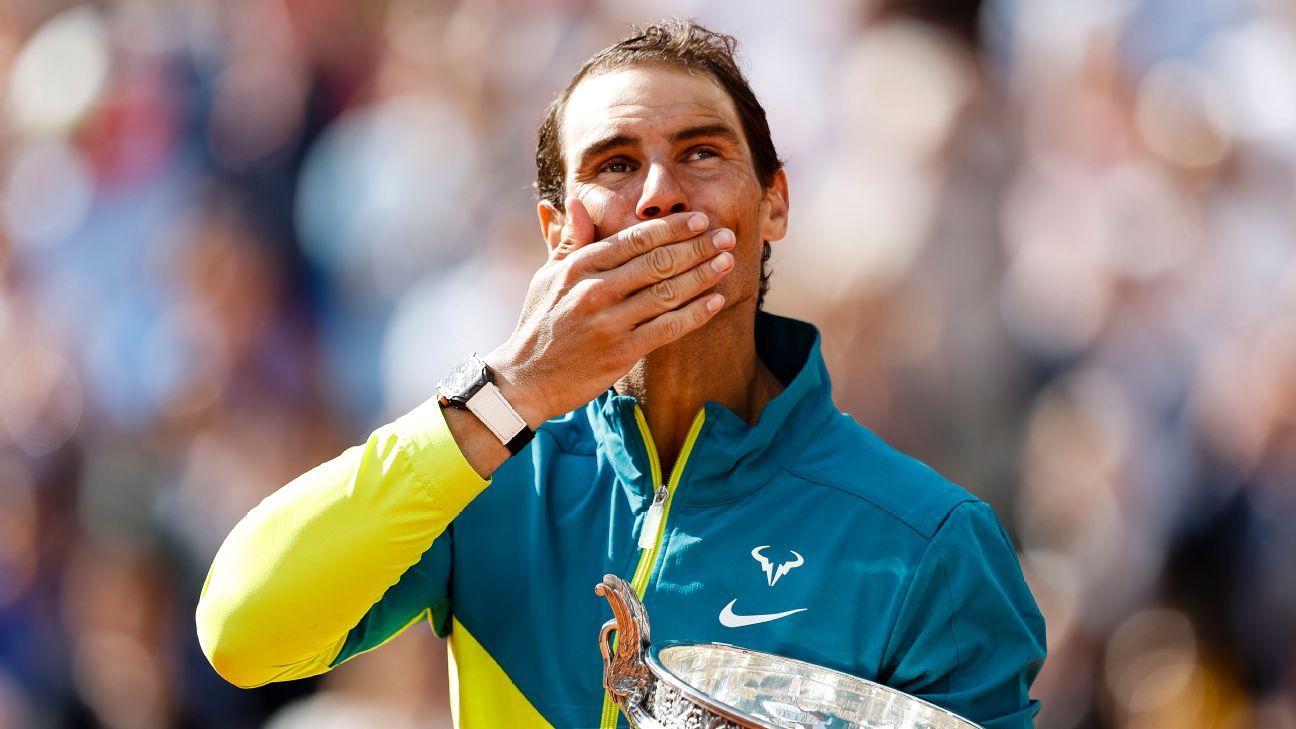 PARIS — After two weeks of twists and turns, everything ended as planned. Iga Swiatek, the best player in the world, won the women’s singles after arriving in Paris as the heavy favorite.

And then it was the legend’s turn on Sunday, as Rafael Nadal won his 14th Roland-Garros title and his 22nd Grand Slam.

Nadal has been mentioned among Novak Djokovic and Carlos Alcaraz as an option to win the men’s singles, but should we ever have doubted him? By late Sunday afternoon, there he was in the middle of his second home, holding La Coupe des Mousquetaires again after beating Casper Ruud 6-3, 6-3, 6-0.

Nadal has scared us at different times this year. He’s much more vulnerable than he was as his chronic left foot injury continues to derail him, but so far he’s held his own for the Grand Slams. He adds the French Open title to the Australian Open he won in January. All this after he mentioned the possibility of retiring at the end of the year – and these thoughts continued all the way to France.

On the morning of the final, there were reports and rumors that Nadal was to announce his retirement later in the day. But the match ended with him shutting them down in front of an adoring crowd.

“I don’t know what will happen in the future,” Nadal said after beating Ruud. “But I will keep fighting to keep going.”

This fight saw him go further, using frequent injections to numb the pain in his foot. But this is not a viable long-term solution. Next week, he will visit a doctor to undergo a procedure called radiofrequency nerve ablation, which he hopes will resolve the problem. If that doesn’t work out, Nadal will look to other options such as major surgery or even retirement.

“Let’s do [it] step by step, as I have done my whole tennis career,” he said on Sunday. “The next step is that. After that, let’s see how it works. I hope, and I am always positive, [it] works more or less well, and can get a little out of it [of] the pain I have. If that happens, let’s see if I’m able to continue for the grass-court season.”

Nadal’s longevity means generations overlap. In the final, he faced Ruud, the man who trains at Nadal’s academy in Mallorca. Ruud grew up idolizing the Spaniard, even making the pilgrimage to Roland Garros to watch Nadal’s 2013 final. As Ruud developed his game, who better to learn from than the man himself? Nadal’s record here counts two ways: one as a role model, the other as an imposing and intimidating figure on the pitch.

There are few sounds like the roar that greets Nadal every time he sets foot on Chatrier. This symbiotic connection he has with the clay has grown over the years, but it all adds to that feeling of invincibility. His ridiculous record of 112 wins and only three losses at Roland Garros only adds to the aura.

“I hope one day I can tell my grandchildren that I played against Rafa on Philippe-Chatrier,” Ruud said on Sunday.

Beyond Nadal’s triumph, this fortnight will be remembered for Alcaraz’s growing development and emergence as a future force, Alexander Zverev’s retirement in the semi-finals due to a sickening injury and the Djokovic’s return to the Grand Slam circuit after missing the Australian Open. There was also a farewell to Jo-Wilfried Tsonga, who lost in the first round to eventual finalist Ruud.

Ruud made history as the first Norwegian to qualify for a Grand Slam singles final, and judging by the back and forth with Holger Rune after their quarter-final, there’s a nice rivalry bubbling over. the low.

But despite various threats to the apparent inevitability of the title, it all came down to Nadal. His ruthlessness on clay resonated with fellow 2022 champion Swiatek.

“I even remember last year when Rafa lost in the semi-finals, I met him [the] the next day, coincidentally, at breakfast at the hotel, and I told him that I cried practically the whole evening because he lost,” Swiatek said. tennis match, you know? You win; you lost. It’s normal.’ Not everyone can do that and treat those big moments like another game, you know. It’s something special.”

She visited her academy in early May and was impressed with her trophy there. All 22 Grand Slams are represented in one way or another, along with his 79 tour titles and two Olympic gold medals. That golden vision of dominance has resonated with Swiatek, and she may be ready to take on her role as the premier force on clay.

It was still the title to lose for Swiatek. She came to Roland Garros as a huge favorite and she delivered, dropping just one set en route to her second Grand Slam title here in Paris in three years.

But despite the distractions, the way she beat Coco Gauff in 1 hour and 8 minutes in the final was utterly ruthless – and typical of her run at Roland Garros.

Swiatek spoke early on about the pressure of being No.1 and how she handles it, but she very rarely looked nervous on the pitch. There were brief glimpses in her fourth-round win over Qinwen Zheng where she had to change her game plan to find answers, but even then she sorted it out in her own way: she sang Dua Lipa for her. -same.

It’s all part of her unique nature: on the pitch, she embraces her unwavering competitive mode, while off the pitch, she’s entertaining and personable, unafraid to share insight into the state of play. spirit of his champion. She said how much she loved the symmetry of the Palace of Versailles, how she went through Agatha Christie’s ‘Murder on the Orient Express’ in a matter of days and her five-song pre-game playlist of AC/DC , Pearl Jam, Gorillaz and Led Zeppelin.

But it all comes down to one overarching goal: he was asked earlier in the tournament what his favorite part of tennis was. “Of course I like to win, it’s pretty obvious,” she replied.

What we’ve also seen over the past fortnight is the world No. 1 growing in her own skin, with impressive honesty. “I adapt to that,” she said at the start of the tournament.

She took on the mental challenges of that heavy moniker by bringing performance psychologist Daria Abramowicz with her, whom she fired after winning the title. Swiatek also explained why she refused to watch the Champions League final for fear it would knock her off her stride. She said it’s something she might feel comfortable doing in the future, but not yet as she navigates life as the best player in the world.

Her triumph capped a turbulent few weeks for the women’s side of the draw. It started with seeds dropping every hour, and by round three Swiatek was the only top 10 left.

She brought order to the previous chaos of the women’s draw, where it was extremely difficult to predict a surefire winner. Her 35-game unbeaten streak equals Venus Williams’ record and puts her two on Martina Hingis’ streak of 37. For Swiatek, the crowning achievement of her fortnight at Roland Garros surpassed Serena Williams’ previous record of 34 wins in a row.

She is now heading to Wimbledon as the undisputed favorite of the post-Ashleigh Barty era, with the likes of Gauff, Emma Raducanu, Petra Kvitova, Simona Halep and possibly Serena Williams all keen to chase her down.

“There’s always something to improve on, honestly,” Swiatek said. “I’m still not like a complete player, you know. Mainly, I feel like even on the net I could be more solid.”

While Swiatek has confirmed that she will be heading to SW19 with the aim of making it two Grand Slams in two, we are waiting to see if Nadal will play there.

“It’s not about being the best [in] history,” Nadal said. “It’s not about records. It’s about, I love what I do, you know. I like to play tennis. For me, what drives me to continue is not the competition to try to be the best or to win more Grand Slams than others. … If I am still able to be happy playing tennis … [I’m] will continue. If I’m not able, [I’m] going to do other things.”

Eventually, that foot will let him down and this era of clay-court dominance will come to an end. We will be left with snapshots of his greatness immortalized in highlights, photos and memories.

He will always be king here. And, it seems, Swiatek could be ready to usher in a new era of clay-court supremacy.