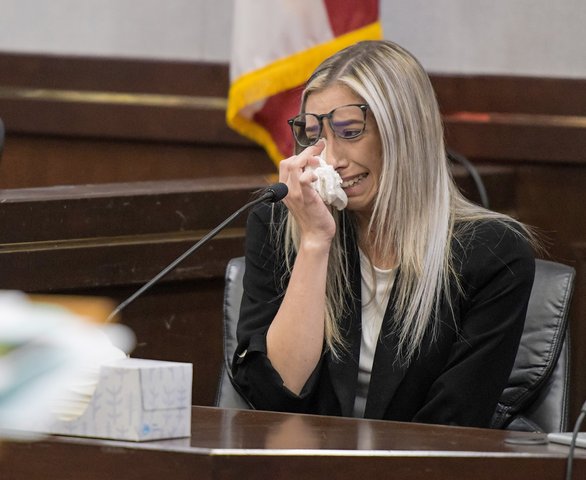 The defense closed its case at around 3:50 p.m. Monday in the trial of Marc Wilson on murder and other charges related to the shooting death of 17-year-old Haley Hutcheson in June 2020. Judge Ronnie Thompson then dismissed the jurors home with instructions to return at 8 a.m. Tuesday to hear closing arguments.

Emma Rigdon, now 22, of Statesboro, who was dating Marc Wilson and riding in his car with him on the night of the shooting, June 13-14, 2020, testified Monday that the couple were approached by a pickup truck that was attempting to run off Veterans Memorial Parkway. Some of the male occupants of the truck had their arms out the windows, “flipping” the torque or in other words giving “the finger”, she said.

“We left the intersection and … the truck started to swerve in our lane, they started, you know, going up and back but stayed there with us,” Ridgon said, sobbing. “I remember going to the rumble strips, and that’s every time Marc pulled off to kind of say, ‘Hey, like leave us alone. We just wanted to go get some food.

Then the truck “kind of rolled back” and came back, Rigdon testified, when Martha Hall, one of Wilson’s defense attorneys, put her on the stand and asked questions.

“They were hanging out the windows, waving their arms and everything. They were swerving…” Rigdon said. “He shot down, just to say, ‘Hey, leave us alone.'”

But she also said she didn’t know there were any girls in the truck just “guys” and couldn’t see their facial features.

“I didn’t hear the exact words, no ma’am,” Rigdon said when Hall asked her if she could hear what the occupants of the truck were saying.

I didn’t hear any insults

“I didn’t hear any,” she said. “I had my dog ​​on my lap. There were other things distracting me at the time.

Black also asked Rigdon to acknowledge statements she made to police and in previous hearings that she urged Wilson to put his gun away and not shoot.

During the encounter, Rigdon heard a loud noise, like a boom, but didn’t know what it was, she said.

At the time, Hutcheson was riding with four other Claxton teenagers in a Chevrolet Silverado crew-cab pickup truck. She was in the backseat, in the middle, while Mason Glisson drove, with Ashton Deloach beside her in the front passenger seat and Luke Conley and Marci Neagley in the backseat on either side of Hutcheson.

A bullet entered the rear window of the truck near the center, leaving a somewhat oval hole through the glass and some shrapnel inside the truck, according to expert testimony. Hutcheson’s head entry wound was also described as ovoid by a medical examiner, and two experts who testified said passing through glass could have caused the bullet to flip.

The jury heard somewhat conflicting opinions from a prosecution and defense expert witness about the relative positions of the car and truck when the shots were fired.

Statesboro Police Detective Keith Holloway, testifying as an expert in crime scene processing and reconstruction, opined that the shot that entered the rear window was fired between the 3:30 a.m. positions and 6 o’clock, that is, from about 45 degrees to the right of the truck to 90 degrees, or directly behind it. Holloway said he believed the shot was fired no further than around the rear corner of the truck bed.

In addition to the bullet – or indeed the lead core of what had been a jacketed bullet – that was removed from Hutcheson’s head during the autopsy, police recovered a second lead core from the front tire side. driver of Glisson’s truck. Firearms and ballistics expert Jay Jarvis, hired by the defense to review the state’s evidence, testified that this bullet and the sign of a bullet under the truck’s chassis were “consistent with the gunshots pulled from the front of the truck”.

After Wilson and Rigdon turned left onto Fair Road, they did not go straight to her house, but to a friend of Wilson’s, James Dixon. Wilson tried to borrow Dixon’s truck, but Dixon refused, noting that he had to drive his children somewhere the next day, he testified last week.

Wilson then returned home – his parents’ home in Sharpsburg in Coweta County – in his own car, a blue Ford Fusion. Statesboro police who traveled to Sharpsburg to search the vehicle said they found no bullet holes or other damage to the vehicle. No defense witness contradicted this.

Although he returned home to Sharpsburg on Sunday June 14, it was only after hearing from detectives on Tuesday June 16 that Wilson told his parents about the incident, both of whom testified on Monday. But on Wednesday, June 17, 2020, Marc Wilson, accompanied by his father, Deron “Pat” Wilson, and defense attorney Francys Johnson, went to the Bulloch County Sheriff’s Office and returned the gun. .

His mother, Amanda Wilson, testified Monday afternoon. In tears, she said that when her son told her what had happened, they collapsed on her kitchen floor as she tried to hold him up, hug him and hold him say everything would be fine.

“’N…, your life doesn’t matter,’ ‘I was going to die.’ They said, “I’m going to kill you,” she blurted out in court, as Black objected that it was irrelevant and hearsay.

Judge Ronald K. Thompson upheld the objection and ordered the jurors to disregard the comment. No one who was actually there on the boardwalk that night testified that this was said. Marc Wilson did not testify, as is his right.

Over the four days of testimony, the jury heard from three of the van’s four surviving occupants – Glisson and passengers Deloach and Neagley – with varying accounts of their actions. But all testified that none of the five had a firearm. Glisson and Deloach admitted to drinking, while all the occupants of the truck were minors.

The jury did not hear directly from the other male passenger, Luke Conley. As he had done in previous hearings, Conley asserted his Fifth Amendment right not to testify, as Statesboro police, early in their investigation, charged him with misdemeanor obstruction for allegedly giving conflicting information.

Conley appeared Monday with his own attorney, Cindy Delgado, and again indicated he would not testify. Thompson, who was leading the trial in Bulloch County Superior Court, heard this during one of the many times the jury absented themselves from the courtroom during interactions involving the judge and attorneys. .

Prior to trial, Thompson had decided to exclude information the defense sought to introduce regarding alleged “prior wrongdoing” by Conley or other occupants of the truck. But Thompson allowed the jury to hear brief answers from a few witnesses questioned about Conley’s reputation.

Marine: Lack of diligence has cost us many court cases