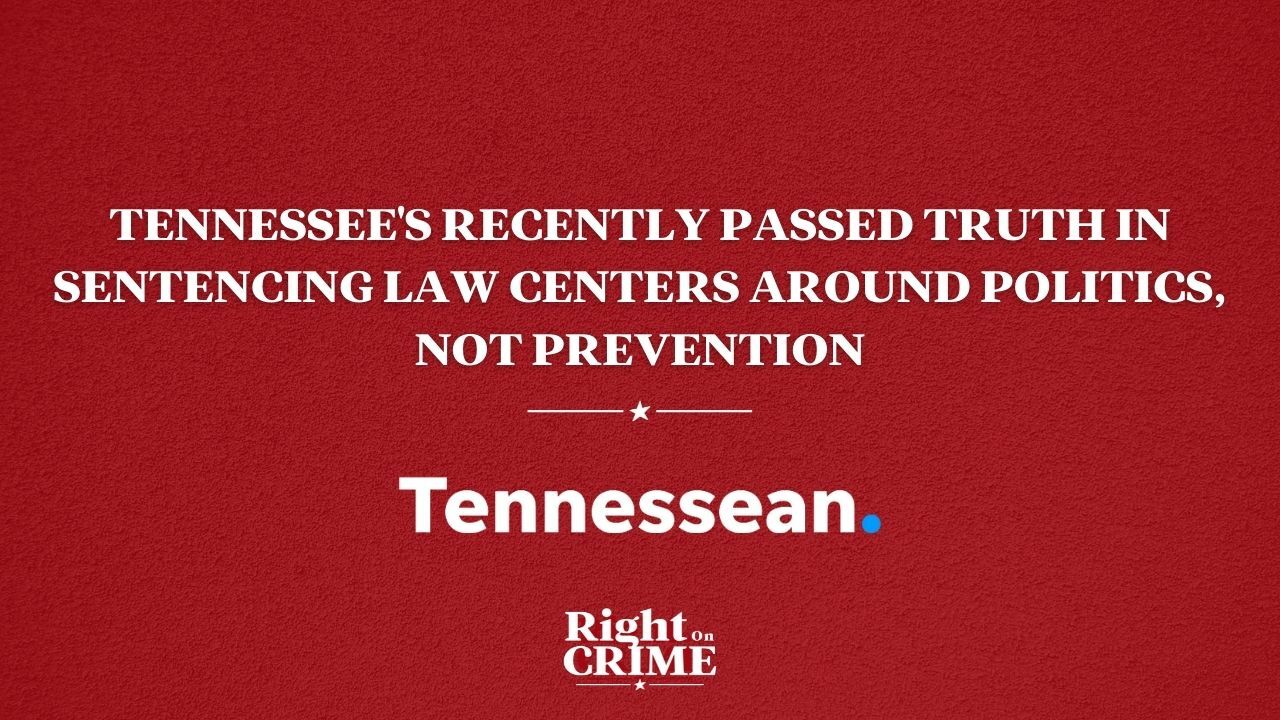 Tennessee’s Recently Passed Truth in Sentencing Law Is Centered in Politics, Not Prevention

Violent crime headlines strike fear into the hearts of Tennesseans. Our leaders have a duty to fight the scourge of violence with strong leadership focused on crime prevention, not political posturing. It is by prevention that success is measured – by victims never created, prison beds vacant for lack of occupants, and billions of dollars unspent on revolving prison doors.

Investment in law enforcement is essential for prevention. Attempts to fund law enforcement are tantamount to sacrificing public safety on the altar of political agendas and must be rebuffed.

Governor Bill Lee understood this mission. As law enforcement was reviled in parts of the country, Governor Lee used his state of the state address to invite them to Tennessee. Additionally, he called on the legislature to allocate “$150 million directly to law enforcement to create safer neighborhoods through the Violent Crime Response Grant Fund.”

Unfortunately, the Tennessee legislature was less inclined towards the prevention model.

In fact, near the end of the session, the Tennessee House Ways and Means subcommittee decided to completely cut Governor Lee’s law enforcement funding for violent crime response. Fortunately, sanity prevailed and $100 million in funding was reinstated.

Why the Hosting Model Doesn’t Work

Instead, Parliament has chosen to invest resources in an accommodation model that measures success through the lens and feelings of tenacity achieved through increased construction and spending to store violent crime without regard to prevention.

To this end, the legislator passed a “Truth in Sentencing” Bill. Governor Lee allowed the bill to become law without his signature.

Offenders convicted of certain violent offenses will serve 100% of their sentence with no chance of getting parole credit. They will be released directly into the community without parole. Certain listed offenses are given earned credit towards release at 85%.

This approach ignores the inevitable reality that 95% of affected inmates will return. Choosing to store violent crimes without aiming to prevent future victimization can be a good sounding board, but is not without human and fiscal consequences.

First, simply accommodating crime fails to reduce crime and, in fact, could have the opposite effect. The proponents present no data to suggest that the crimes identified in their legislation do not respond to correctional rehabilitation programs, and that incentive rehabilitation will not reduce the security risk these particular offenders pose upon release.

We recognize that there are honest concerns about the effectiveness of credits earned for deviant and violent behavior. He is responsible for reviewing the correctional effectiveness of a program against the risk of releasing a dangerous criminal early into the community.

However, this new law is not exclusive to violent crimes. This includes aggravated burglary, which can include stealing a $100 leaf blower from a garage, and distributing drugs for the third offense. Questions may exist about whether vocational training reduces the security risk of an offender convicted of murder, kidnapping, or rape. Much less for thefts and drug-related offences.

Credible fears exist that the legislation could undermine safety. Tony Parker, the former commissioner of the Tennessee Department of Corrections, warned of the public safety implications of limiting earned credit incentives, especially for nonviolent offenses. The law risks undermining correctional efforts to ensure that offenders return better than they arrived.