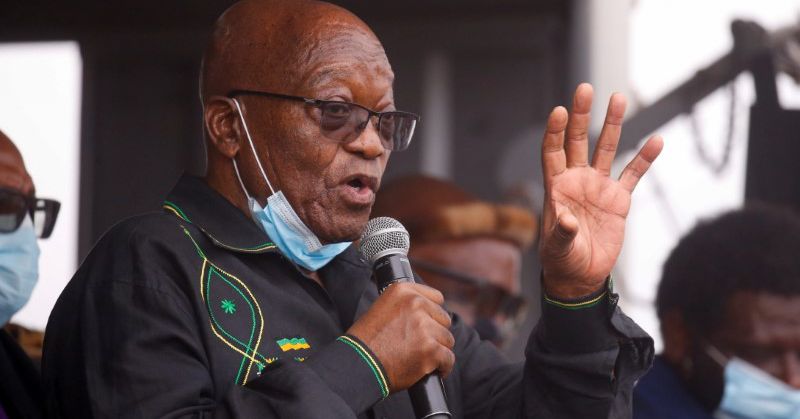 Former South African President Jacob Zuma addresses supporters who gathered at his home, as a South African court agreed to hear his challenge to a 15-month prison sentence for not attending a corruption hearing in Nkandla, South Africa, July 4, 2021. REUTERS / Rogan Ward

Zuma, whose imprisonment last month for contempt of court led to widespread looting, was due to appear before the Pietermaritzburg High Court on Tuesday in a corruption case related to arms trafficking dating back to his tenure as vice president.

The 79-year-old is serving a 15-month sentence in Estcourt prison in KwaZulu-Natal province, but was transferred to hospital on Friday for medical observation. Read more

“The NPA (National Prosecuting Authority) on behalf of all parties sent a joint letter to the Honorable Justice Koen reflecting the parties’ agreement to postpone the hearing,” the Foundation said on Twitter.

The request was made because the former president was in the hospital, he added.

NPA spokesman Mthuzi Mahaga declined to say whether a request for a postponement had been made. South African justice and Zuma’s lawyers did not respond to an email seeking comment.

The High Court of Pietermaritzburg is in KwaZulu-Natal – the home province of Zuma – where it enjoys strong support and which has been the center of nearly a week of looting and arson that has taken place. have spread to other parts of the country and have claimed more than 300 lives.

Its appearance could again provoke tensions and violent demonstrations, in particular in Pietermaritzburg.

Zuma and Thales have both pleaded not guilty.