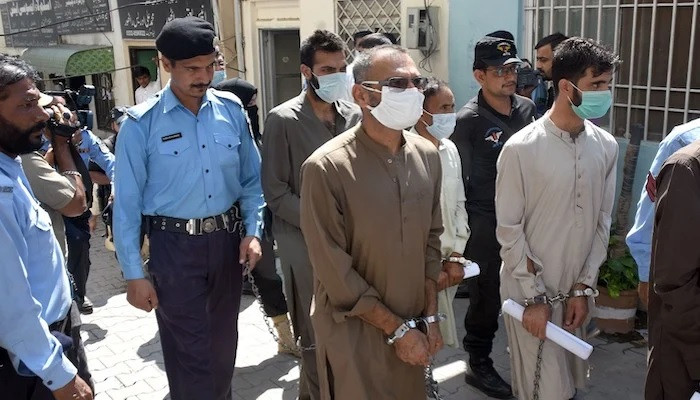 The Supreme Court (SC) has ordered the prosecution to present its evidence against Ismat Adamjee, the mother of Zahir Jaffer, the main suspect in the Noor Mukadam murder case, at the next hearing scheduled for October 18.

The Supreme Court was considering bail requests from the parents of Zakir Jaffer and his wife Ismat Adamjee, which the couple filed separately with the SC after the High Court in Islamabad (IHC) previously denied their bail requests. bail.

Judge Mansoor Ali Shah asked where the mention of Ismat Jaffer had been made in the IHC order.

Ismat Jaffer was not even mentioned by the IHC in his order [denying the couple bail]said Judge Umar Ata Bandial. We’re just trying to figure out the case, Judge Bandial explained.

Zakir and Ismat’s lawyer Khawaja Haris argued that the murder case was registered against Zahir Jaffer and that his parents were in Karachi at the time of the murder.

Judge Qazi Amin later said that the Noor Mukadam murder case was very sad and expressed his condolences to the victim’s family.

He, too, said the court was looking for information only to understand the facts of the case.

Judge Bandial said he found out during recess that there had been a death in his family and that he had to leave for Lahore immediately.

The Supreme Court then ordered the prosecution to present their evidence against Ismat Zakir at the next hearing.

Haris, however, replied that the forensic reports had not yet been received.

The right to a fair trial is mandatory but delay in resolving a case adds to anxiety, Judge Bandial said, explaining that the purpose of a speedy trial is to give immediate relief to the innocent people named in the trial. the case.

All forensic reports have been received except the reports on six cellphones, the attorney general said.

The hearing was adjourned until October 18.

Noor Mukadam, a 27-year-old woman, was raped and murdered with a sharp instrument on July 20 within the confines of Kohsar Police Station in Islamabad. A murder case was then recorded at the same police station by Noor’s father, former Pakistani Ambassador Shaukat Ali Mukadam.

Zahir Jaffer is the prime suspect in the Noor Mukadam murder case. The grisly murder, in which Mukadam was beheaded, took place on July 20 in the F-7 area of â€‹â€‹Islamabad.

Islamabad police arrested suspect Zahir Jaffer on the night of July 20 at his home where, according to Noor’s parents, he killed her with a sharp instrument and cut off her head.

The grisly incident sparked a nationwide campaign to seek justice for her, with #JusticeforNoor becoming a major trend on Twitter.

Zakir and Ismat had filed bail applications in the Noor Mukadam murder case, saying they had nothing to do with Noor’s murder, while the police challan presented in court said that if Zahir’s parents had informed the police in time, Noor could have been saved.

What does the detailed verdict of the High Court in Islamabad say?

In its detailed verdict, the IHC ruled that Zahir Jaffer’s parents committed the crime of aiding and abetting Noor’s murder.

The court said Zahir’s parents knew their son had taken Noor hostage and that despite this information, they did not share it with the police. The guard made it clear that he had informed Zakir Jaffer, the court added.

The detailed judgment also refers to the decisions of the SC.

According to Black’s Law Dictionary, failing to do one’s duty also means helping and encouraging, according to the IHC verdict.

Zahir Jaffer, the court said, said in his confession that he told his father about Noor. Whether Zahir’s statement is acceptable or not must be decided by the trial court, the IHC said.

Zahir Jaffer’s parents then asked the SC for bail.

The petition, filed with the Supreme Court by lawyer Khawaja Harris on behalf of Zahir’s parents, Zakir Jaffer and Ismat Adamjee, asks whether failure to report the “incident” counts as an aid to the crime.

The text of the petition indicated that the High Court in Islamabad (IHC) had wrongly considered Article 107 of the Pakistani Penal Code.

The petition further stated that there was no evidence to suggest that Zahir’s parents knew of their son’s intentions and that their request for bail could not be dismissed based on the statement of a co-accused.

The petition says a full challan of the case has yet to be presented to the trial court, while the High Court exceeded its jurisdiction by ordering the trial to end in two months.

The request filed with the SC also indicated that the delivery of a verdict in two months went against the rights of suspects and the principles of a transparent trial.

The police investigation into the murder case of Noor Mukadam was one-sided and not impartial, the petition says. Defendants will not be able to defend themselves properly in prison, he said, adding that it is very difficult for them to communicate with their lawyers in prison.