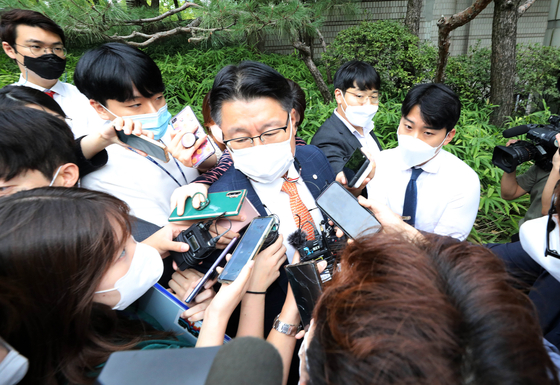 Reporters flock to the attorney for Yoo Dong-gyu, a key suspect in a land development scandal in Seongnam, Gyeonggi, who was questioned by the Seocho Central District Court in south Seoul on Sunday. [NEWS1]

Prosecutors on Sunday obtained an arrest warrant for a key figure in the land-use planning scandal in Seongnam, south of Seoul, on suspicion of causing damage to the city by devising a profit distribution system that has favored some private companies that have invested in a project in Daejang. -dong, Seongnam.

The Seoul Central District Prosecutor’s Office, headed by Prosecutor Kim Tae-hoon, on Saturday requested a formal arrest warrant against Yoo Dong-gyu, former acting chairman of the Seongnam Development Corporation, in the Central District Court. of Seoul, charging him with breach of trust and bribery under the Special Economic Crimes Law.

The Seoul Central District Court questioned Yoo on Sunday afternoon and decided to grant prosecutors a warrant in the Yoo case.

Prosecutors took Yoo into custody from a hospital emergency room Friday morning after obtaining a court-issued arrest warrant to hold him for questioning. Yoo underwent intensive interrogation for about 12 hours until 9:40 p.m. and spent the night in the Seoul Detention Center before being interrogated again the next day from 10 a.m.

Yoo is accused of having designed the composition of the shareholding and the profit distribution method of the mixed public-private consortium Seongnam Park, the developer of the Daejang-dong project, to favor Hwacheon Daeyu, a small asset management company private and its subsidiaries Cheonhwa Dongin No.4 and No.5.

Hwacheon Daeyu joined the Daejang-dong Development Project – which cost around 1.15 trillion won ($ 981 million) – to develop 968,890 square meters (239 acres) at Daejang-dong in Seongnam, Gyeonggi, in as residential real estate. As of 2019, Hwacheon Daeyu is said to have made a profit of 57.7 billion won on an investment of 49.95 million won, representing a stake of only 1% in the project.

However, the city-owned Seongnam Development Corporation has reportedly received only 183 billion won in profits over the past three years, despite having a 50 percent stake in the project.

Interviewing witnesses from the Seongnam Development Corporation, prosecutors learned that a clause in the investment contract, which allegedly required private sector investors to return excess profits resulting from the development, had been removed on Yoo’s orders, and asked him about this directive.

Speaking on condition of anonymity to JoongAng Ilbo, an official from the Seongnam Development Corporation said, â€œIf the cap clause [on excess profits] had been maintained, the development of Daejang-dong may not have become such a problem. He added that Yoo removed those who opposed removing the clause from the draft.

Prosecutors also questioned Seongnam Development Corporation employees about cash gifts or valuables from Hwacheon Daeyu in exchange for setting up a profit distribution system that would be beneficial to the company.

Evidence of these bribes first came to light after Jeong Young-hak, owner of Cheonhwa Dongin No.5, submitted 19 tapes of conversations between several private Daejang-dong project stakeholders, including Hwacheon Daeyu’s owner Kim Man-bae and Yoo at the state prosecutor’s office.

Yoo also faces allegations that he was promised a 70 billion won profit cut from his ownership of Cheonhwa Dongin No. 1, another subsidiary of Hwacheon Daeyu, under an assumed identity. However, Yoo’s attorney denied this allegation as “baseless”.

“This allegation is a misrepresentation of the funds Yoo borrowed to start a natural fertilizer business with Jeong after Jeong quit his post as chairman of the Gyeonggi Tourism Organization and joined the Seongnam Development Corporation,” he said. said a lawyer for Yoo.

However, prosecutors suspect that the funds Yoo claims to have been loaned were in fact a payment given to him in exchange for giving Hwacheon Daeyu preferential treatment in the distribution of profits from the Daejang-dong project.

Bribes worth more than 100 million won carry a minimum prison sentence of 10 years under the Special Economic Crimes Act.

The scandal over the nature of Hwacheon Daeyu’s profits from the Daejang-dong development project has engulfed politicians from all political backgrounds, with ruling Democratic Party presidential favorite and Gyeonggi Governor Lee Jae-myung making the ‘under scrutiny for his role on the project and his relationship with Kim, a former reporter who interviewed him in 2014.

Kwak resigned from the PPP on September 26 and from the National Assembly on Saturday, while his son’s home was raided by prosecutors on Saturday.