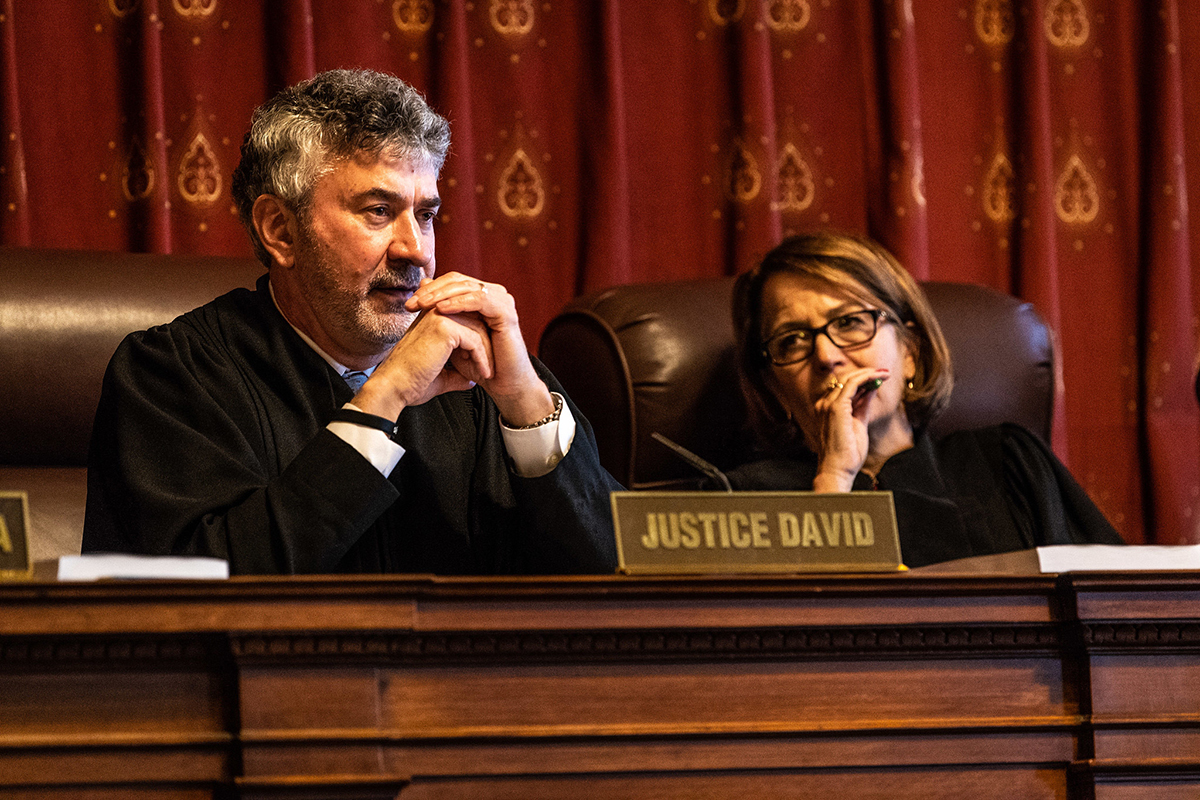 Among the hundreds of carefully assorted treasures arranged in Judge Steven David’s spacious office, located right next to the Indiana Supreme Court courtroom in the Statehouse, are two large portraits above his desk .

The men in the photos share the same name, Shirley David, but one is Steven’s father and the other his grandfather, taken during their time in the military over 70 years ago.

David, 64, attributes his long-standing dedication to public service to his education, a career that took him to the state’s highest court in 2010.

While David plans to continue working for the public until he can no longer do so, his tenure as a judge in Indiana now has an expiration date.

On November 3, the 106th Indiana Supreme Court Justice announced his intention to retire in the fall of 2022.

During an interview with Indiana Lawyer on Nov. 4, David explained that he felt he had to resign after his wife, Catheryne Pully, a lawyer and commander of the US Navy Reserve, was called up to active duty.

David said everything started to fall into place for his wife over the past six weeks and that Pully was already working in Norfolk, Virginia.

“I just need a little more flexibility,” he said of his decision to step down. “I can’t be the righteousness that I want to be and focus on trying to do what I need to do and supporting her and her very difficult mission as the two-star Admiral’s attorney general who commands the entire US Navy Reserve Forces, and I don’t think I can make a phone call or anything like that, either.

“â€¦ I don’t think I could continue doing this job because I think I need to do this job, and the people of Indiana deserve more than I can give in a year or two.”

David’s legal career in civilian and military life – sometimes at the same time – is long.

The 1975 Columbus North alumnus attended Murray State University for undergraduate studies, where he graduated with distinction as a Distinguished Military Graduate on an ROTC scholarship.

After graduating from Indiana University’s Robert H. McKinney School of Law in Indianapolis in 1982, David served in the United States Army Judge Advocate General’s corps on active duty until 1986, and then in reserve until 2010.

David was mobilized after September 11 in Iraq and Guantanamo Bay, as a trial lawyer, defense lawyer, military judge, training officer, judge advocate and commander. In 2007, he was chosen by then Defense Secretary Robert Gates to serve as Senior Defense Counsel for the Office of the Military Commission.

David said his time in the military “had a huge and profound impact” on his training.

“Duty, selfless service, teamwork, dedication, integrity, loyalty, honesty, hard work – all of these characteristics, attributes, are what I hope everyone thinks they are. important, â€David said. â€œâ€¦ These are very valuable lessons and life-shaping experiences. I hope this made me a better person and therefore a better judge and justice.

In civil life, David’s legal career began in Columbus, where he practiced personal injury law, family law, and civil litigation, before moving to Boone County to serve as an attorney. internal for Mayflower Transit Inc.

David was elected to Boone Circuit Court in 1994, presiding over civil, criminal, family and juvenile cases until his appointment to the Supreme Court by the government of the day. Mitch Daniels in 2010, succeeding former judge Theodore Boehm.

Boone’s senior judge, Matthew Kincaid, was elected to his seat in 2003, when David was a circuit court judge. He said David had a â€œgenerous spiritâ€ and had always been of help to other judges and lawyers.

â€œ(David) always had time for me when I was a brand new judge,â€ Kincaid said. â€œI visited him often and he never lost patience with me or didn’t seem to have time to talk to me. He gives himself fully. I don’t know of anyone else who gives out their cell phone number like they do.

David is famous for giving out his cell phone number at large meetings, most notably at the Indiana State Bar Association’s annual summit last month. He said the purpose of this is for lawyers and trial judges to be able to give their opinion and ask questions.

â€œI think we are a very accessible Supreme Court. I think we are a very accessible justice system, â€said David. “We want to know. We just created the Equity and Access Commission. We’ll have task groups and fill those task groups, basically asking the men and women of Indiana to give us their point. view – their audit – of our justice system and operations in this state. â€œHere’s what we’re doing and what we’ve been up to, tell us if we’re on track and what we’re missing.â€â€¦ You could say it’s bold, but we say it’s the only way to do it.It’s just a culture and a mindset.

Kincaid said he sees David as a “balanced” lawyer who has had a profound impact on the state in many areas, including advocating for advances in forensic technology. David has been a strong advocate for e-filing, which is now available in all 92 counties, as well as the Odyssey case management system.

â€œAs I think back to how the courts have operated over the past year and a half during the pandemic, what an important thing it was to have this technology in place when we did it,â€ Kincaid said. â€œWithout electronic filing, we would not have functioned near our capacity. He has rendered a great service to the State.

ISBA President Clayton Miller said David has worked tirelessly with the bar over the years.

â€œIn general, I consider Judge David to be a reliable and accessible friend of the state bar association and its members. â€¦ I think we’re lucky in Indiana that there’s a close working relationship between the bench and the organized bar, â€Miller said. â€œIt’s something we don’t take for granted. â€¦ David has been an integral part of this relationship, serving as a key point of connection between bars and the court.

Kent Eastwood, Boone County District Attorney and former chairman of the local bar association, recalled how, even as a judge, David would come to local CLE events – including one a few weeks ago – before recently moving from the county to be closer to where he grew up.

Eastwood recalled a story where once, after hearing about an underage case, David bought the kid Christmas presents because he knew they wouldn’t have any.

â€œHe cared about every case that was before him,â€ Eastwood said. â€œIt didn’t matter if it was a murder case or a ticket type case. Every case was important and he treated everyone in front of him as if it was important to him. Second, he always listened to every litigant before him and let them make their point and their arguments. You could tell he was listening and thinking about it.

Upon retirement, David said he intended to serve as a senior judge and would continue to chair the Equity and Access Commission and the Indiana Conference for Business Opportunities. legal education. In addition, he said there were “several” other initiatives in which his colleagues had asked him to stay involved.

Outside of public service, David said he plans to continue doing triathlons in retirement. He also plans to climb Mount Kilimanjaro with his wife in January 2023.

The Indiana Judicial Appointments Commission will begin its search for the next judge and will provide a list of three finalists for Governor Eric Holcomb to choose from in the coming months. David’s retirement means Judge Mark Massa will hold the title of Senior Judge, closely followed by Chief Justice Loretta Rush.

Joel Schumm, clinical professor at IU McKinney, said institutional knowledge is lost when there is a transition, but there are also opportunities.

â€œWe lose a lot of experience, but you gain new perspectives and there is an opportunity for diversity on the pitch – ground that hasn’t had a lot of diversity historically,â€ Schumm said. â€œWe’re going to be about five years away with the same judges, which is quite a long time compared to when (David) was appointed in 2010, where we had a period where it seemed like new judges were coming in every two years before. have stability.

Ultimately, the selection of a person of color and / or a woman to join the bench will depend on the candidates, Schumm said.

Schumm said he believed the tribunal was “fairly well balanced” in terms of experience and expertise. He added that he expects a large number of trial court judges to apply for the post, especially those between the ages of 45 and 55.

While politics are not supposed to play a role in the selection of a judge, the results often reflect the governor’s party, Schumm said.

â€œOver the past few years the judicial nominating commission has put on women, women of color, for the Court of Appeal that the governor did not choose, and these people happen to be Democrats,â€ he said. he declared. â€œThis, I think, is a problem: What will the application pool look like? Will people who are not Republican apply, and should they even bother to apply if there is no or virtually no chance that the governor will appoint them?

â€œThere is a lot of diversity outside of the Republican Party,â€ he continued. “If the pool is limited to Republican lawyers and judges, it will be a much smaller and less diverse pool than if they were Independents and Democrats – people of all political stripes.”

Miller recalled that diversity should be a factor when looking for qualified candidates for the job.

â€œHaving a tribunal that reflects the diversity of our state is an important value,â€ he said. â€œI hope that would be a consideration as the governor has several qualified candidates. The diversity that a particular qualified candidate would bring is relevant to this choice, from the perspective of the bar. “â€¢