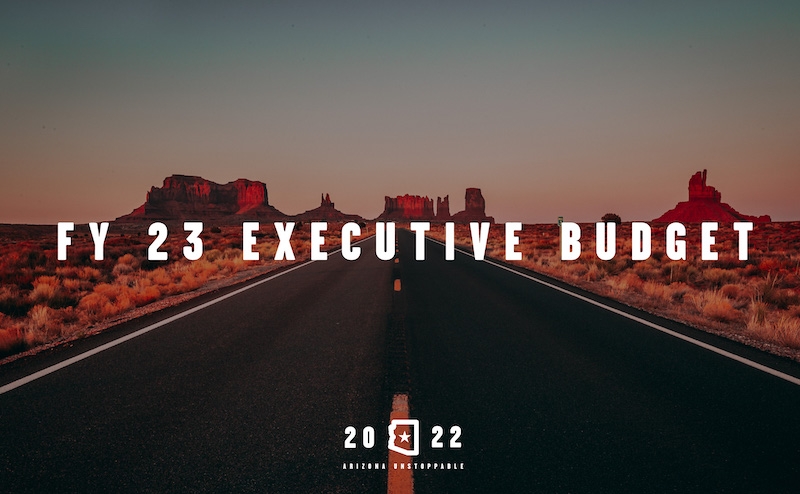 PHOENIX — Governor Doug Ducey released his budget for fiscal year 2023 today, continuing the momentum that has made Arizona a success in education, public safety, natural resources and infrastructure.

“Whether it’s paying off billions in debt, growing our Rainy Day Fund to a record $1 billion, getting a high credit score and lowering taxes for hard-working Arizonans, we make decisions fiscally responsible people who benefit the people we serve: the citizens of Arizona,” Governor Ducey said. “Our FY2023 Executive Budget continues this management. We are going full throttle to leave Arizona stronger than we found it through targeted investments in education, public safety, border security , infrastructure and things that matter to Arizonans.

Strengthening Arizona’s Strong Financial Position
For the past seven years, Arizona has lived within its means. Under Governor Ducey, Arizona enjoyed the longest period of balanced budgets in modern state history. While its population has grown, the budget is balanced, the economy is booming, and the government is smaller and more efficient than it has ever been. This year, the Executive Budget will continue to secure Arizona’s fiscal future by raising the Rainy Day Fund to the highest level in state history.

Since 2016, Governor Ducey has generated $7 billion in ongoing new revenue and put more than $2 billion back into the pockets of Arizonans. In fiscal year 2023, the governor intends to continue allowing Arizonans to keep more of their hard-earned money through the creation of a state-earned income tax credit. , returning an average of $128 per year to hard-working taxpayers.

Investing in the things that matter most to Arizonans
The Governor’s Budget addresses the issues that matter most to Arizonans. Through historic investments, the Executive Budget promotes school choice and focuses on student outcomes, improves public safety and soldier compensation, resolves the border crisis, increases our water resistance, expands a vital part of I-10, keeps families together through family care, catalyzes the modernization of the state park system, and helps Arizona families keep more of their hard-earned money.

Catching up with Arizona’s kids and increasing parent responsibility
The proposed budget invests an additional $322 million in K-12 education to get children back on track as they recover from the effects of the pandemic and remote learning. To further mitigate learning loss, $100 million in federal resources will be allocated to a summer camp, helping to close the achievement gap.

The governor’s office briefed Republican and Democratic lawmakers on budget details this week.

Highlights of the budget plan include: