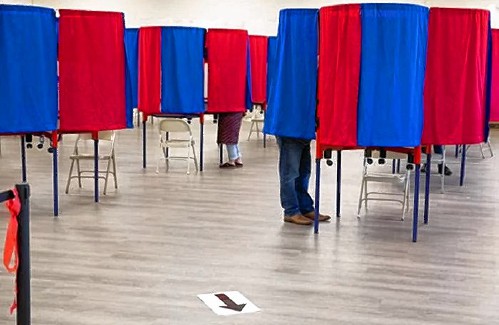 Now that Republican Gov. Chris Sununu has signed a bill creating a special “vote under oath,” it will be up to local election officials to make it work and the courts to determine whether it’s even legal.

Keene City Clerk Patricia Little said the law, which comes into effect in 2023, will slow the vote count and create further challenges for a system that has traditionally worked smoothly.

“It will definitely have an impact,” she said Monday. “I’m a little disappointed the governor signed it, but he did, and we’ll have to make the best of it.”

Under Senate Bill 418, which Sununu signed into law on Friday, election officials would give sworn ballots to people who register to vote on Election Day without proper identification.

Election officials would keep these ballots separate from others so that these votes can be subtracted from the election total if the voter does not provide the proper ID within seven days.

Currently, voters can sign an affidavit attesting to their qualifications and can then vote. A post-election verification investigation may take place regarding these voters, but in any case, their votes stand.

Secretary of State David Scanlan suggested before SB 418 was approved that lawmakers might want to ask the NH Supreme Court about its legality, but he also said it would work.

Proponents of the bill say it will ensure that unqualified voters will not fraudulently participate in elections, many of which are determined by narrow margins. Opponents said there was no evidence of significant fraud that would justify changing the system in a way that could violate the NH Constitution.

The ACLU of New Hampshire filed a lawsuit in Hillsborough South County Superior Court on Tuesday against the measure, alleging it would unconstitutionally diminish the secrecy of the vote by tying voters’ names to affidavit ballots. .

“The government shouldn’t know who you’re voting for in a state election — that’s why SB 418 is an unconstitutional violation of privacy rights,” said ACLU senior counsel Henry Klementowicz. of New Hampshire, in a written statement. .

“Voting is one of the most important democratic things a person can do, and it deserves to be done privately and in secret.”

Election officials would keep a list of those who voted by affidavit, so those votes could be subtracted later if proper identification was not provided. Opponents of the bill say that by matching those names to the corresponding ballots, someone could theoretically find out how those people voted.

On Friday, nonprofit groups 603 Forward and Open Democracy Action, along with other plaintiffs, filed a lawsuit in the same court over the law, alleging that it put up barriers to voting and violated a provision of the NH Constitution that requires City Clerks to report election results. to the state within five days.

Under the new law, municipalities would have 14 days to report vote totals after subtracting affidavit ballots in cases where voters never provided the necessary ID.

Delays in knowing the results of the primary elections will lengthen the time needed to create the general election ballot and distribute it to residents outside the country.

“Due to the law’s lengthy certification process, foreign voters, including military voters, will not receive their mail-in ballots in a timely manner, threatening their ability to have their votes returned and counted,” the lawsuit states. filed on Friday.

Federal law requires that ballots be mailed to military voters 45 days before a federal election.

“This means that local election officials are required to send general election ballots to the military just days after, and possibly even before, primary election results are certified under SB 418,” says the trial.

“It creates an impossible task for local election officials and may ultimately prevent our members of the armed forces from voting.”

Little, the town clerk of Keene, said an advantage of the current system is being able to quickly identify election results after the vote. She also wonders how election recounts will fit into the new law.

Across the town of Keene, around 50 people tend to vote without proper documentation in a national election, she said. Approximately 13,000 Keene residents voted in the November 2020 general election.

Few wonder about the need to create a new voting system.

“There have been instances where someone voted in their hometown and then in another community, but those instances would be in the single digits statewide,” she said, noting that would be a crime.

Sununu and other state officials said New Hampshire had an accurate and honest electoral system, despite former President Donald Trump’s claims that fraud led to his defeat in the state in both last general elections.

“New Hampshire’s Secretary of State is the primary authority on our state’s elections, and he has given me full assurances that this bill does not affect the state’s ability to publish ballots. military on time, and that our processes will work without delays or impediments to its passage,” Sununu said in a statement after signing the bill.

Rick Green can be reached at [email protected] or 603-355-8567 These articles are shared by partners of The Granite State News Collaborative. For more information, visit collaborativenh.org.