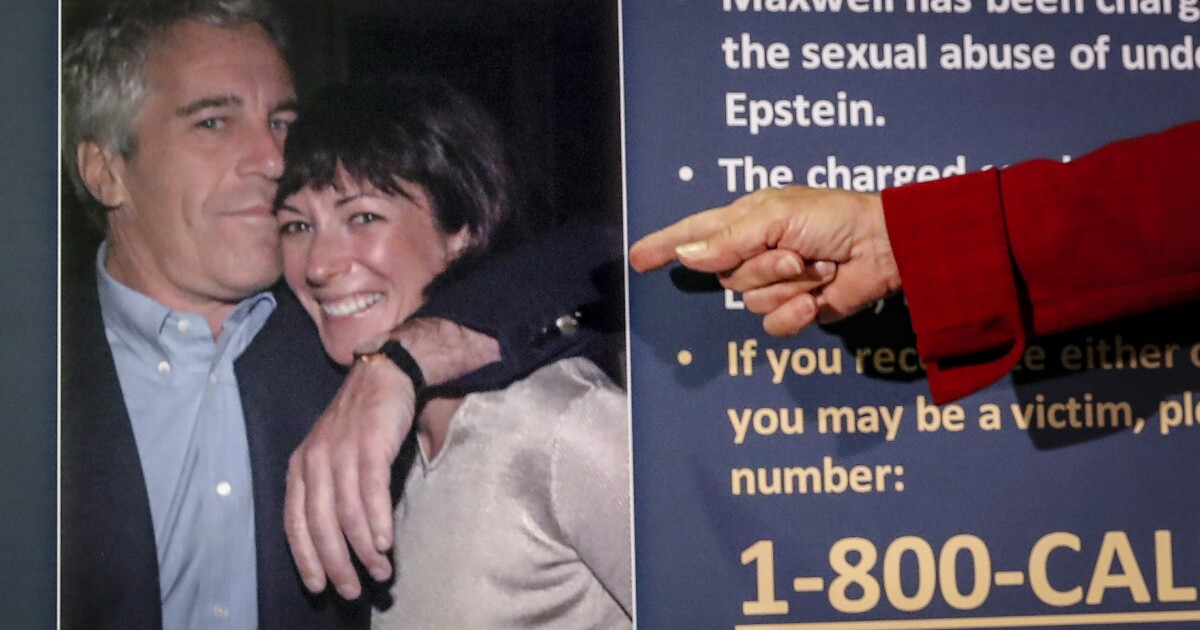 British socialite Ghislaine Maxwell is set to spend at least 30 years in prison for her role in the sexual abuse of teenage girls over a 10-year period by her former boyfriend, convicted sex offender Jeffrey Epstein, US prosecutors said in a statement on Wednesday. written arguments.

Prosecutors said she should serve between 30 and 55 years in prison, under federal sentencing guidelines. They made their recommendations to the judge who will preside over a sentencing hearing Tuesday in Manhattan federal court.

Maxwell, 60, was convicted in December of sex trafficking and other crimes after a month-long trial that included testimony from four women who said they were abused as teenagers.

Defense lawyers said in a sentencing brief last week that Maxwell should not spend more than five years in prison and should not pay for Epstein’s crimes because he was the mastermind and primary aggressor and “orchestrated the crimes for his personal gratification”. Epstein killed himself in 2019 in prison while awaiting a federal trial on sex trafficking charges in Manhattan.

But prosecutors said Maxwell played an “instrumental role in the horrific sexual abuse of several young teenage girls” between 1994 and 2004 at some of Epstein’s lavish residences. They called his crimes “monstrous.”

“As part of a disturbing deal with Jeffrey Epstein, Maxwell identified, cared for and abused multiple victims, as she enjoyed a life of extraordinary luxury and privilege. In her wake, Maxwell left her victims scarred permanently through emotional and psychological harm,” prosecutors wrote.

“This damage can never be undone, but it can be factored into crafting a just sentence for Maxwell’s crimes,” they added.

Prosecutors also urged the judge to reject Maxwell’s clemency requests on the grounds that she suffered extraordinarily in jail while awaiting trial and after. Defense lawyers said she faced death threats and harsh conditions that caused her to lose hair and weight.

Maxwell’s appearance at trial proved those claims to be untrue, prosecutors said, adding, “The defendant is in perfect health with full hair.”

They said Maxwell “enjoyed remarkable privileges as a high-level inmate that far outweighed the benefits accorded to the average inmate. It’s no surprise that a woman who’s led a life of incredible luxury would complain about her life as a prisoner, but this fact does not come close to meriting leniency upon sentencing, let alone the extraordinary degree of leniency sought by the accused.

Prosecutors also attacked claims by Maxwell’s lawyers that she had suffered “a credible death threat” in prison, saying an internal investigation into the alleged threat revealed that an inmate pointed out to someone in passing something like, “I would kill her if someone paid me a million dollars. As a result, they said, someone who heard the remark reported it and the inmate was moved from the housing unit.

They also cited what they described as Maxwell’s “complete failure to address his offensive conduct and complete lack of remorse.” Instead of showing even a hint of acceptance of responsibility, the defendant desperately tries to lay blame wherever she can.

Maxwell’s efforts to disparage the government’s motives to prosecute her and her claim that she is held responsible for Epstein’s crimes are “absurd and offensive”, prosecutors have said.

Prosecutors said almost all of the $22.5 million in assets claimed by Maxwell in a bail proposal that was never granted were given to him by Epstein.

“The defendant’s access to wealth allowed her to present herself as a supposedly respectable member of society, who rubbed shoulders with royalty, presidents and celebrities. That same wealth dazzled girls from troubled families who became Epstein’s defendants and victims,” prosecutors said.

The sentencing submission also included quotes from letters written to the judge by women who gave evidence during the trial, including Kate, an ex-model from Britain who said “the consequences of what Ghislaine Maxwell did have been of great significance to me”.

“I struggled with substance use disorder and ultimately triumphed. I suffered from panic attacks and night terrors, which I still struggle with. I suffered from low self-esteem, from a loss of career opportunities. I struggled a lot with feeling unable to trust my own instincts, choosing romantic relationships,” she wrote.