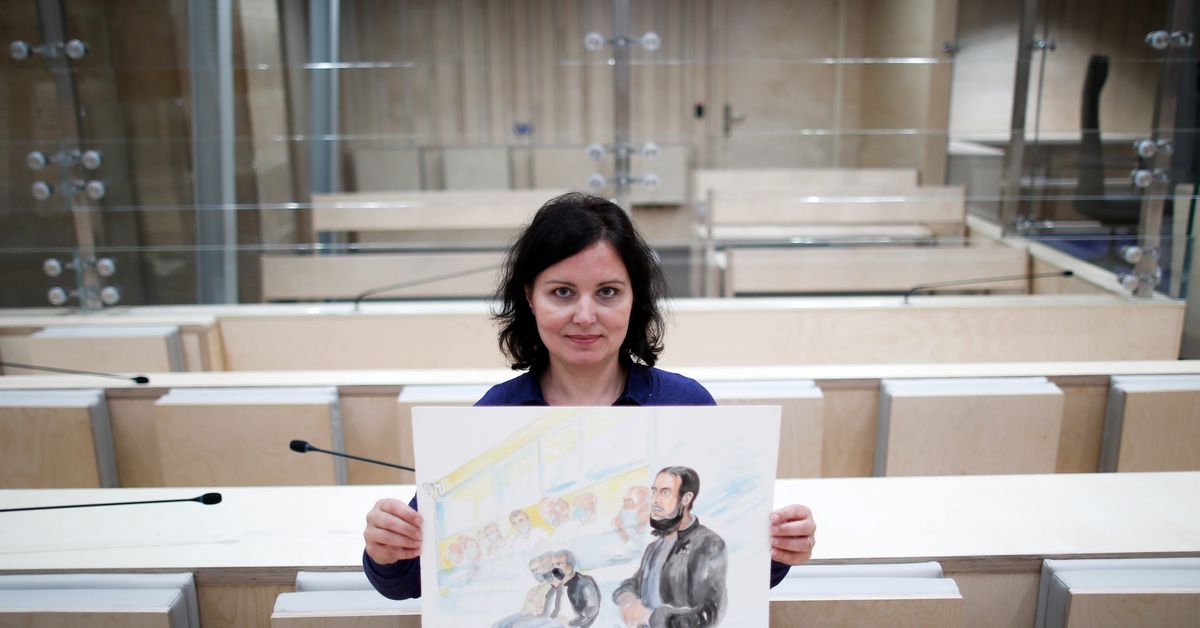 French court artist Elisabeth de Pourquery poses with one of her artist sketches showing Salah Abdeslam, one of the defendants, who is widely regarded as the only surviving member of the group suspected of carrying out the bombings. Paris in November 2015, in the courtroom installed at the Paris Criminal Court for the trial of the November 2015 Paris attacks, in which 130 people were killed and 400 others injured, in Paris, France, September 27, 2021. Photo taken on September 27, 2021. REUTERS / Gonzalo Fuentes

PARIS, Sept. 30 (Reuters) – French court artist Elisabeth de Pourquery stared the self-proclaimed ISIS activist in the eye and fixed an image she would capture for posterity.

Separated by a glass screen, she was seated a few meters from Salah Abdeslam, suspected of being the sole survivor of a commando of suicide bombers and gunmen who killed 130 people in a series of coordinated attacks in Paris in November 2015.

“What’s important is his aura and his eyes, those round, deep eyes,” de Pourquery told Reuters in his studio.

“You have this look that’s very deep, and very intense, which clearly shows a lot of fear. And that’s what you have to recreate with the brush.”

When Abdeslam removed his black mask on the first day of the trial and defiantly declared himself an Islamic State soldier, de Pourquery drew swift strokes with his watercolor brush.

“You could hear the tone of his voice. It was reasoned, thoughtful,” continued de Pourquery. “And it was almost freezing.”

Now, three weeks after the start of the trial, the artist and the accused were each getting used to the other’s presence, with the Franco-Moroccan nodding to her at the start of each hearing, she said. declared.

De Pourquery said he sketched out 150 trials, including that of Islamist activists who attacked satirical magazine Charlie Hebdo in early 2015.

Court hearings can last up to 10 hours a day, during which de Pourquery will sketch up to seven designs for the TV news.

It can be exhausting and emotional work, curled up in one position for hours, focused on the emerging sketch but fearful of missing a brief moment that defines the hearing of the day.

â€œIt’s good to switch off and paint something else, a nice watercolor, the sea, the beach, something that has nothing to do with the trial,â€ she said.