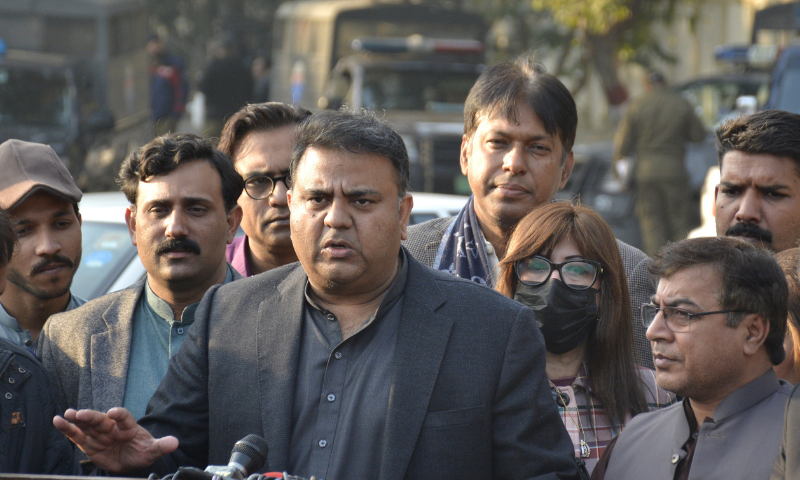 LAHORE: Federal Information and Broadcasting Minister Fawad Chaudhry has claimed opposition leader in the National Assembly Shehbaz Sharif has only two options: go to London or go to jail.

Chaudhry said the “disappointed” opposition did not even attend the parliamentary session, saying the entire leadership was in touch with the ruling Pakistan Tehreek-i-Insaf (PTI). He also blamed former Defense Minister Khwaja Asif for saying Pakistan faced serious threats to its sovereignty, adding that instead the PML-N leader was serving and receiving a salary from a Dubai based company on an iqama.

As the opposition started talking about the supposed return of former Prime Minister Nawaz Sharif, Chaudhry said, they were unable to maintain their position as the government stepped up and said it would take Mr. Sharif home. “The government wants the Lahore High Court to take note and bring Mr. Sharif back,” he said.

The federal minister parried a question about the political implications of a very important appointment the prime minister was due to make in 2022 and resorted to saying “for goodness sake” after a brief hiatus.

Mr Chaudhry also dodged the question of why the PTI government used the colors of its party flag on the health card, which amounted to embezzling public money for party advertising. He responded by asking if the PTI should stop using the color red at all.

The Minister of Information insisted that Pakistan’s politics, defense and economy were stable and the national economy grew by 5%.

“The amendments to the finance law will help create a tax culture and the sales tax of Rs 343 billion imposed includes Rs 71 billion in tax and the rest was refundable and adjustable,” he said. Mr. Chaudhry also claimed that the tax was only imposed on imported items.

As a result of the amendments, Chaudhry added, the dollar-rupee parity would improve and help break the cycle of price hikes over the next three to four months. He said the pressure on the public would also start to ease and only increased due to inflation in energy and international commodities. “Pakistan’s economic position will strengthen by August-September 2022.”

He praised Finance Minister Shaukat Tarin for taking action to save Pakistan’s film and entertainment industry. The tax on film material and film production has been removed and only foreign content has been taxed to protect local artists, he added.

Responding to a question, the minister said the PTI government had so far paid off $ 32 billion in debt during its three years in office and would increase that amount to $ 55 billion over the next two years. “If Pakistan survives today, it is thanks to Imran Khan and the PTI economic team,” said Chaudhry.

He said every political party has the right to play politics, but the PPP and PML-N do not want to do national politics. “If Asif Zardari and Bilawal Bhutto-Zardari want to come to Lahore, they can come,” he said, adding that the public PPP meeting could be held in a house 250 meters away.

Responding to a question, the Minister of Information said local elections would be held soon as the final touches were made to the LG law. He said a newly formed central executive committee of the PTI would decide on the party’s mayoral candidate for Lahore.

Mr. Chaudhry paid tribute to soldiers martyred during an operation against terrorists in the Mirali region of North Waziristan.