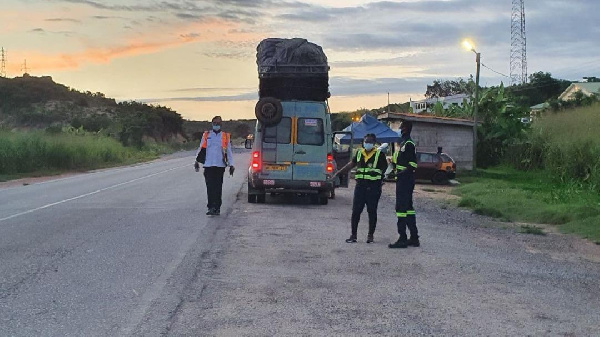 Drivers traveling on the Accra-Takoradi highway with over-the-top non-prescribed lamps affixed to their vehicles had them removed or disconnected by officers from the National Road Safety Authority (NRSA) in the Central region on Thursday evening.

The exercise, according to the NRSA, is a coordinated effort to ensure full compliance with Rule 65 of the Road Traffic Regulations, 2012 (LI 2180).

Regulation 65, among others, required that vehicles or trailers be equipped with electrically illuminated lamps or other type approved by the licensing authority.

It further specifies that vehicles may be fitted with one or two additional auxiliary headlamps and indicates that a high beam is placed so as to allow the lamp to protrude beyond the bottom of the windshield frame.

The enforcement exercise was carried out in collaboration with the Police Motor Traffic and Transport Department (MTTD), the Driver and Vehicle Licensing Authority (DVLA), transport operators and other road safety agencies.

Although the NRSA did not meet strong resistance from the drivers, some of them demanded that the removed lights be returned to them, but the NRSA refused, insisting that they could fix them at home. new, which was not well received by some of the drivers.

NRSA Regional Director Ms Linda Affotey-Annang advised drivers and vehicle owners to voluntarily comply with the new regulations by removing all unapproved lights from their vehicles to avoid prosecution.

The penalty for using non-prescribed lamps is a fine not exceeding fifty (50) penalty units (GHC600) or imprisonment not exceeding three months or both.

Ms Affotey-Annag described the enforcement exercise as a success and said it would be carried out on a weekly basis with random checks alongside awareness and education until the end of the year.

She stressed the importance of the exercise and said the practice of using these unapproved lights blinds drivers and puts other road users at risk of accidents which mostly occur at night.

She explained that the regulations required a vehicle to have two factory lamps in the front with one on each side and positioned to show visible white or yellow light at a prescribed distance and to indicate the width of the vehicle.

Ms Affotey-Annag added that even if a maximum of four high beams and headlamps were allowed, the electrical switching must be arranged to allow the use of only two of these lights at a time.

However, she noted that many vehicles, especially heavy utility vehicles, had excessive headlights on the roofs and turned on at the same time.

Some of the drivers whose lights were removed said they were unaware of the law and called on the NRSA and other road safety agencies to step up their education.

They also complained about the lack of public lighting on the road and said the additional lights helped them see better on the road.