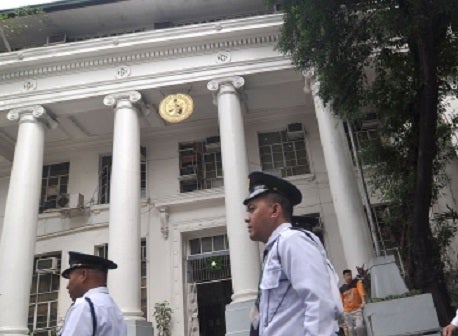 MANILA, Philippines — The Department of Justice (DOJ) said Monday that star prosecution witness Rafael Ragos’ nullification of his testimony against Senator Leila de Lima cannot “destroy the strength of the evidence” from the government. .

“The testimonies of witnesses presented by the prosecution are sufficient to pin down and prove the charges against defendants Senator Leila de Lima and Ronnie Dayan,” the DOJ said in a statement released hours after reports surfaced that Ragos withdrew its charges against the detainee. senator, who fiercely criticizes President Rodrigo Duterte.

Ragos released an affidavit reiterating all of his allegations that de Lima was involved in illegal drug trafficking inside New Bilibid prison.

In his previous testimony before a Senate investigation and the Muntinlupa City Court, Ragos claimed that on November 24 and December 15, 2012, he received a total of 10 million pesos from high-level inmates involved in drug trafficking and allegedly handed over the money personally. to Dayan twice.

But in his notarized affidavit in Pasig City on April 30, 2022, Ragos claimed that all of his prior statements against the senator were not true and that he was “coerced” into making those prior affidavits.

READ: Another witness retracts charges against De Lima, says he was ‘coerced’

Ragos, a former deputy director of intelligence at the National Bureau of Investigation (NBI) who also served as officer in charge of the Bureau of Corrections (BuCor) when de Lima was justice secretary, named former DOJ chief Vitaliano Aguirre II as the person who “questioned and coerced” him into “admitting something that didn’t happen” during their many encounters.

“I couldn’t do anything at the time,” Ragos said. “If the secretary of justice himself compels you, what can you do? He can do more, more than I can do.

INQUIRER.net contacted Aguirre regarding Ragos’ allegations. But this reporter has yet to receive his response as of press time.

But the DOJ expressed doubts about Ragos’ motive for withdrawing his testimony against de Lima, noting that it came more than five years after he testified in the Senate and in court for three days.

“In all of the above cases, there was no mention of coercion or intimidation. Thus, the blatant delay on the part of Ragos in recanting his previous statements is indeed questionable and casts doubt on its veracity. His motive is also highly suspicious,” the DOJ said.

“It is left to the discretion of the court to consider his recanting affidavit if he can completely destroy his prior affidavits and testimony,” he added.

Ragos was the fifth prosecution witness in the second case against de Lima in Section 204 of the Muntinlupa Regional Trial Court. He has already finished his testimony.

Ragos is not a witness against de Lima in the third case before Muntinlupa’s RTC branch 256.