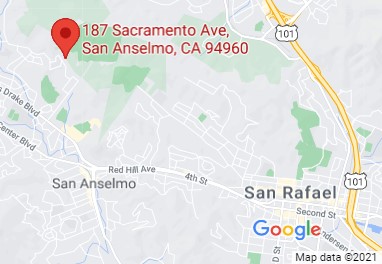 A plan to build San Anselmo homes that was denied by the Marin County Supervisory Board was also denied by a state appeals court.

The dispute involves 187 Sacramento Ave., a vacant 74,000 square foot property located on a hillside near the Terra Linda border. The owners, Beth and Tim Sasan, applied in 2016 to build a 3,328 square foot residence with an attached apartment and garage.

A group of neighbors challenged the project on various allegations, including that the house was too large compared to others; its modern design would not suit the neighborhood; and that would reduce the privacy of nearby residents.

Opponents also said the project would encroach on public access to open space; it would damage a stream; and the proposed retaining walls were too imposing along the long driveway extending from Sacramento Avenue.

Nevertheless, the Marin County Planning Commission, by 6 votes to 1, approved the project with some modifications in June 2017.

Opponents appealed to the supervisory board, which held a hearing in March 2018. Supervisors sided with the neighbors and rejected the project, but gave the Sasans the opportunity to submit a revised request. Supervisor Katie Rice suggested repositioning the house to alleviate some of the perceived problems.

The Sasans appealed to Marin County Superior Court. When that was denied, they took the case to the 1st San Francisco District Court of Appeals.

In a June 10 decision, a three-judge appeal committee ruled against the couple, finding the supervisory board’s decision to be legally sound and supported by “substantial evidence.”

“It is clear from the file that the board of directors reviewed the project documentation, considered neighbors’ comments on the proposal and concluded from these sources that the project violated the county’s design review criteria. “Judge Rebecca Wiseman wrote for the court.

â€œWe were very pleased with the decision of the Court of Appeals in the Sasan case,â€ Marin County attorney Brian Washington said. â€œThe Supervisory Board has carefully examined the proposed house and made well-founded conclusions in support of the rejection of the project as proposed. The Court of Appeal correctly referred to the council’s cautious conclusions.

Sasans attorney John Sharp declined to comment on the decision, but said the couple are considering their options.

The Sasans have submitted another revised proposal that follows the county’s approval process. The new plan reposition the house and address other concerns.

â€œThe project has been reviewed and scaled down over the years, and new constraints have been added over time to an already constrained site,â€ wrote Casey Clement, director of builder Thompson Development Inc., in a letter to County on March 9. .