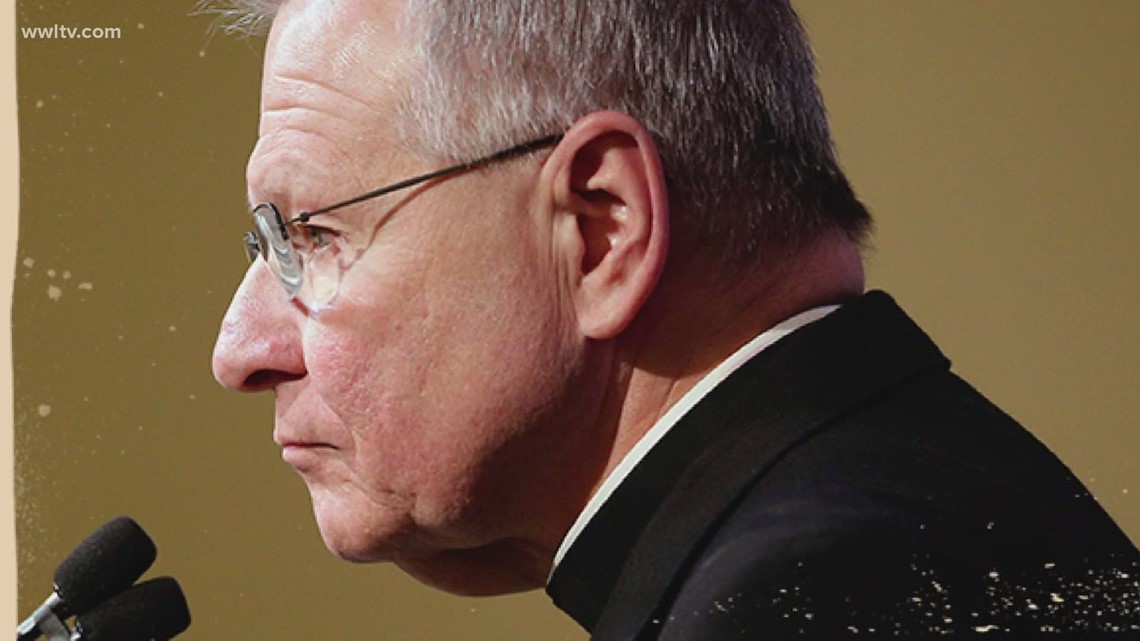 Aymond knew about the assault allegations for over a year, dad says

The archdiocese has long maintained that its hands are tied and lawyers have advised them that they cannot suspend Matherne based on a single unverified complaint.

TANGIPAHOA PARISH, Louisiana — Painful memories and emotional turmoil overwhelmed Chad Becnel and his family last month when the Louisiana Department of Corrections mistakenly released a former Catholic teacher and coach who had sexually assaulted him and his family. at least 16 other boys in the 1980s and 1990s.

The state rectified the mistake and sent Brian David Matherne back to jail this month after WWL-TV asked why he had been freed “for quite a while” when the sentencing judge had explicitly denied Matherne any early release.

But the Becnels still wonder why Matherne was allowed to continue coaching and teaching at Sacred Heart of Jesus School in Norco for more than a year after Chad’s father, Walter, said he had brought his son’s allegations to the attention of the Auxiliary Bishop of New Orleans. in February 1998.

This is a year before the church admitted knowing the first accusation against Matherne. And the auxiliary bishop overseeing Catholic schools at the time was Gregory Aymond, who has led the local church as archbishop since 2009 and has come under fire in recent years for his handling of clergy sex abuse allegations. local.

For example, Aymond added two priests to a list of credibly accused clergy only after WWL-TV and The Times-Picayune asked him about allegations against those priests dating back decades. He is also accused in several lawsuits of reacting slowly to allegations of abuse or allowing accused officials to continue to play a role in the church after allegations were made.

But as archbishop, Aymond always removed accused clergy from active ministry when he received credible complaints. The Becnels want to know why that wasn’t the case with Matherne, who was allowed to continue working at Sacred Heart and ended up pleading guilty to assaulting at least one other young victim in the months after the archdiocese acknowledged that it was already investigating the matter. .

The archdiocese has long maintained that its hands are tied and lawyers have advised them that they cannot suspend Matherne based on a single unverified complaint.

Walter Becnel said he got a similar excuse when he filed the original complaint with Aymond on behalf of his son on February 9, 1998.

“He called me back a few days later and said, ‘Look, I really need to talk to Chad before we can go any further because we need to verify that he is indeed the victim and we need to know his story'”. Becnell said. “So I called Chad and I said, ‘Listen, Bishop wants to talk to you. “He said, ‘I’m not ready to talk to him. Not ready, but not ready yet.’

Chad was 20 at the time and had disclosed Matherne’s abuse to his therapists at the Tau Center, a rehab center in Baton Rouge. But he wasn’t ready to talk directly to Aymond about it.

In the 15 months that followed, Walter Becnel says the community ostracized him and his family. Members of the school and Sacred Heart Church began wearing camouflage ribbons in support of Matherne, an apparent reference to Camp LaBranche. Matherne often took boys hunting and fishing – and where Chad Becnel said he and other boys were molested by Matherne.

Walter Becnel said the pastor of Sacred Heart Church at the time acted as if nothing had happened, even asking the Becnels for money to support the construction of a new gymnasium for sports teams of Matherna.

“I said, ‘You can have your pledge card. I don’t want anything to do with Brian or his gym,” Walter recalled. “I said because he had been molesting boys for a long time at this school. He said, ‘Wait, wait.’ I said, ‘Don’t tell me you don’t know because Greg Aymond called you and told you to investigate him.’ He said, ‘Well, I did, I did. I called Brian. He told me he didn’t. I said, “Is that what you did? You called Brian and asked him if he did it or not? Come on, pedophiles don’t condone that kind of stuff!”

It was not until one of Chad’s therapists first heard his allegations against Matherne in April 1999 that the therapist insisted on reporting him to the police.

It was then that the Archdiocese finally suspended Matherne and the St. Charles Parish Sheriff’s Office launched an investigation that garnered more than 300 allegations of sexual abuse from dozens of victims and led to the arrests. of Matherne in August 1999.

After his arrest, archdiocesan spokesman Tom Finney said the church became aware of the allegations against Matherne in February 1999, a year after Walter Becnel said he spoke with Aymond.

A mother of one victim, who did not want to be identified, sat down with WWL-TV and said her son and others would not have been assaulted if the church had removed Matherne in February 1999. The St. Charles Parish Sheriff Greg Champagne said a victim had been sexually assaulted by Matherne as recently as three weeks before her arrest in August 1999.

WWL-TV asked Finney after the arrest why Matherne was allowed to continue teaching and coaching children at school even though the church was already investigating an allegation against him.

“We can’t suspend someone on just one charge that they deny,” Finney said. “And we had to complete our investigation, and that took two months, and we suspended it when we felt there was sufficient reason to suspend it.”

By contrast, Aymond has sent letters to several priests in recent years removing them from active ministry while the church investigates the validity of the newly received allegations.

Times have certainly changed since 1999, especially after 2002, when a Boston Globe “Spotlight” investigation revealed a massive cover-up of child sexual abuse by priests and the United States Conference of Catholic Bishops implemented new policies to protect children and young people.

But expectations for protecting children from accused pedophiles weren’t all that different in 1999, as Raul Bencomo, a lawyer representing several of Matherne’s victims, expressed in an interview with WWL-TV after the arrest. of Matherna.

“If someone is suspected of embezzlement, you’re not going to let them handle the money,” Becnomo said. “With something as serious as a child sexual abuse allegation, you should definitely fire that individual or put them in another position, with pay, while you do your due diligence.”

When asked why this was not how Aymond handled the 1998 complaint against Matherne, the Archdiocese said in a statement: “Archbishop Aymond has addressed the situation involving Brian Matherne on several occasions at the over the years. Matherne’s early and mistaken release from prison came as a shock and surprise to us, and we are relieved that the state’s mistake was so quickly corrected.”

► Get the latest news from your neighborhood directly by downloading the new FREE WWL-TV News app now in the IOS App Store or Google Play.