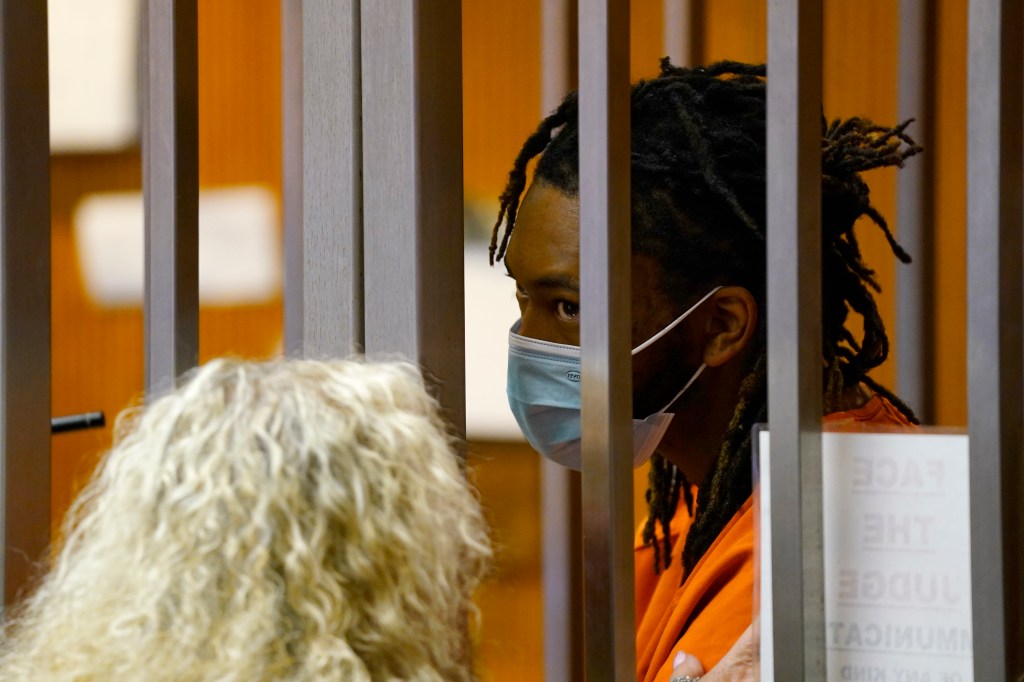 SACRAMENTO — Three days after a rash of gunfire killed 6 people and injured at least 12 others near the state Capitol, police confirmed Wednesday that at least five shooters were involved in a scuffle between two groups of men.

“The identity of these shooters is still being worked out, but based on witness information, victim information as well as numerous videos we have received, we believe there were five shooters,” said Sacramento Police Department spokesman Sgt. Zach Eaton said at a press conference on Wednesday.

At least five people fired shots during the melee, which followed a fight that broke out early Sunday near 10th and K streets, just as bars and clubs were coming out for the night, police said. The exchange of gunfire – 100 shell casings were found – took place between two groups of men and gang violence is believed to be involved.

“While I cannot go into specifics about the gangs involved and the gang affiliation of the individuals, we would like to confirm that this shooting was gang related,” Eaton said.

“This downtown tragedy is a very public example of what families in many of our neighborhoods know all too well,” Chief Kathy Lester said in a news release. “The suffering inflicted by gang violence is not limited to gang members. It overflows to claim and destroy innocent lives and harm our entire community. »

Dandrae Martin, 26, was charged Tuesday afternoon with unlawful possession of a firearm by a felon. He was previously incarcerated in Sacramento County Jail on suspicion of assault with a deadly weapon or firearm. Prosecutors did not explain the change or the lack of assault or homicide charges. Martin will remain in custody without bond until his next court hearing later this month. But Sacramento police confirmed Tuesday they believe he was one of the gunmen involved in the shooting.

“I know we can confirm Dandrae Martin was one of the shooters,” Eaton said Tuesday.

Martin’s brother, Smiley Martin, was arrested Tuesday on suspicion of multiple weapons-related crimes. Smiley Martin was found seriously injured at the scene of the shooting, police said. He was being treated at a local hospital, where he is expected to remain until he recovers enough to be committed to Sacramento County Jail on suspicion of possession of a firearm by a prohibited person and possession of a a machine gun, police said. Smiley Martin has yet to be charged and police have refrained from saying he fired a gun during the attack.

Investigators are still working to determine if Smiley Martin was one of the five shooters, Eaton said Wednesday, adding that authorities have not ruled out whether any of the victims were also shooters. “We didn’t rule it out and we didn’t rule it out,” he said.

Authorities call it an “extremely complex” investigation, involving the review of nearly 200 videos and social media posts submitted by the public, the analysis of security camera footage, the conversation with dozens of witnesses and processing more than 100 casings strewn across several blocks in downtown Sacramento.

A stolen handgun converted into an automatic machine gun was found at the scene of the weekend shooting and was in Smiley’s possession, police said Tuesday. Investigators said they were “still investigating” whether the weapon was used in the shooting.

A third person was arrested on suspicion of illegal possession of a firearm on Tuesday after police said they were ‘seen carrying a weapon in the aftermath of the shooting’, according to a police press release . However, the department noted that the man was not suspected of anything “directly related to the shooting” and that his weapon was different from the one used in the shooting. The man was released on bail on Tuesday.

Speculation has been circulating on social media regarding possible links between the Martins and one of the victims killed in the shooting, Joshua Hoye-Lucchesi.

Photos posted on social media seem to indicate that Hoye-Lucchesi, 32, was friends with the Martins or at least knew them. Hoye-Lucchesi and Smiley Martin posted a photo of the two of them posing next to each other less than a month ago.

In an interview Tuesday, Eaton said he didn’t have details about the Martins’ relationship with Hoye-Lucchesi. He did, however, confirm that authorities believe the Martin brothers were together at the time of the shooting.

Police said they are also going through the suspects’ and victims’ social media accounts.

Smiley Martin mentioned a street gang several times on his Facebook page. He also appears to have posted several videos and photos to Facebook in 2020 from a jail cell, donning pants that say “CDCR Prisoner” – an acronym that stands for California Department of Corrections and Rehabilitation.

Shortly before 5 a.m. on Sunday, Dandrae Martin posted a status that read “Smh I’m touched…”. Other Facebook users commented on the post, asking if Smiley was injured and saying they were praying for him.

During his court appearance, no visible injuries could be seen on Dandrae Martin, who was wearing an orange jumpsuit and blue surgical mask and had his back to the camera crews behind him. Authorities are also reviewing a Facebook Live video allegedly posted shortly before the shooting in which Smiley Martin allegedly brandished a gun. This post no longer appears on his social media page.

Dandrae Martin had an outstanding warrant in connection with a 2014 domestic violence case in Riverside County, for which he was sentenced to three years probation, according to court documents. He also served time in an Arizona prison in 2019 and 2020 for an aggravated assault case, although details remain unclear about his time there.

Meanwhile, Smiley Martin was the subject of a letter sent last year by a Sacramento prosecutor to the Board of Parole Hearings, which opposed his release from prison in a domestic violence case. Smiley Martin had previously been imprisoned in a weapons case in 2013 and served time in prison for a robbery in 2013, the letter said.

In August 2017, the district attorney’s office filed charges of kidnapping, bodily harm, assault with a deadly weapon, and intimidation of a witness or victim against Smiley Martin, alleging he broke into a girlfriend’s house, dragged her by the hair, punched her in the face and whipped her with a belt. He was convicted in 2018 and sentenced to 10 years in prison, but was released on probation in February after receiving more than 500 days of pre-conviction credits and “additional post-conviction credits”, serving approximately the half of his sentence, according to California Department of Corrections and Rehabilitation officials.

The prosecutor argued in the letter that Smiley Martin “clearly had little respect for human life and the law” and had a criminal record dating back to the age of 18.

The Board of Parole Hearings denied Smiley Martin parole in a non-violent parole review in May 2021 and he was released after he had “completed his sentence as defined by law”, have said CDCR officials.

Linda Parisi, a private attorney, is currently representing Dandrae Martin due to an overload of cases at the Public Defenders Office. During Tuesday’s hearing, Parisi asked that the case be continued until April 26. He will remain in custody without bond until at least that date.

Outside the courthouse, Parisi said she had yet to see a police report of the events that unfolded early Sunday. She described her client as “very dark” during their limited conversations and said she was waiting to see what additional charges would be brought against her client and others. She also took a moment to speak out against gun violence.

“This kind of event that affects a community like this – it’s more than a dimension. It’s more than criminal justice,” she said. “As a community, we have to fighting gun violence because our whole community is suffering, all families are impacted by this.