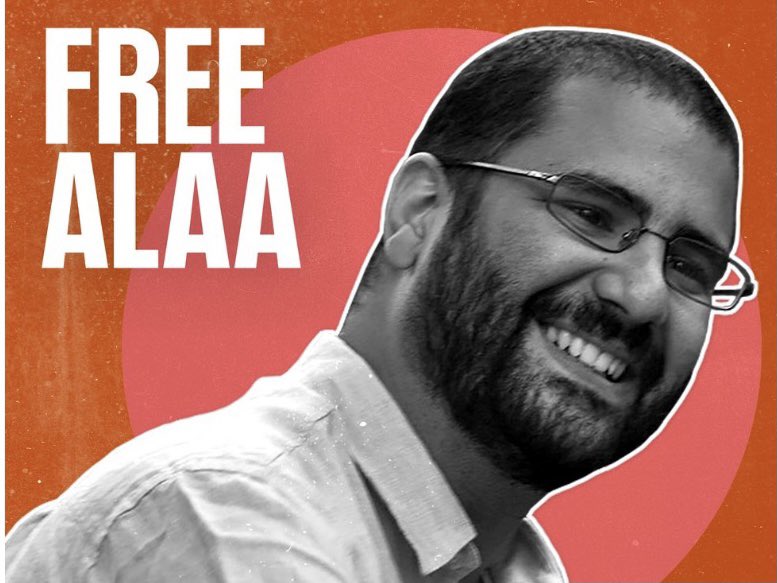 Alaa Abdel-Fattah is a British-Egyptian writer, human rights defender and software developer. He was one of the main spokespersons and activists of the revolution of January 25, 2011. It was published in many outlets; is well known for founding a major Arabic blog aggregator; and has been involved in a number of citizen journalism initiatives. His book, You Have Not Yet Been Defeated, which compiles some of his deeply influential writings, has been widely praised.

Alaa has been arrested under every Egyptian head of state During its lifetime. He is currently in detention following an unfair trial on spurious charges related to his defense of human rights. On April 2, 2022, Alaa went on an indefinite hunger strike as a last resort for freedom. After more than 200 days of partial hunger strike, Alaa announcement that from November 1, 2022, he stops his previous intake of 100 calories and goes on a full hunger strike. Alaa also decided that on November 6, 2022, coinciding with the start of COP27 in Sharm el-Sheikh, Egypt, he would start a water strike. This means that if he is not released, Alaa will die before the end of COP27.

“If one wanted death, a hunger strike would not be a struggle. If we only clung to life by instinct, then what good was a strike? If you delay death solely out of shame at your mother’s tears, then you diminish the chances of victory… I have made the decision to step up at a time that I consider appropriate for my fight for my freedom and the freedom of prisoners of a conflict in which they are not participating or from which they are trying to get out; for the victims of a regime unable to manage its crises except through oppression, unable to reproduce itself except through incarceration” – Alaa wrote in a letter to his family announcing the escalation of his hunger strike.

On October 31, 2022, the United Nations (UN) Special Rapporteur on Human Rights and the Environment said, “Ahead of COP27, I join the chorus of global voices calling for the immediate release of Alaa Abd el-Fattah, an Egyptian activist who has been languishing in prison for years simply for speaking his mind. Freedom of expression is a prerequisite for climate justice!”

We, the undersigned organizations and groups:

Background information: On September 29, 2019, Alaa Abdel Fattah was arrested while fulfilling his terms of probation at El-Dokki police station. He was interrogated before the Supreme State Security Prosecution (SSSP) for joining an illegal organization, receiving foreign funding, spreading fake news and misusing social media; he was then remanded in custody pending case no. 1356 of 2019. On the same day, Alaa’s lawyer, Mohamed el-Baqer, attended Alaa’s interrogation and was also arrested, questioned before the SSSP and remanded in custody pending the same case and arbitrary accusations. During their pre-trial detention, Alaa Abdel Fattah and Mohamed al-Baqer were arbitrarily added to the list of Egyptian terrorists in a separate case (2019 No. 1781), for which they were never questioned or allowed to defend themselves. As a result of this designation, they risk a travel ban, an asset freeze and, for el-Baqer, possible disbarment as a lawyer. On December 20, 2021, following an unfair trial in an emergency state security court, in which they were denied their right to due process (defense attorneys were denied the right to present a defense on behalf of their clients and were denied permission to copy the case files), Abdel Fattah was sentenced to five years in prison, and el-Baqer and the blogger Mohamed “Oxygen” Ibrahim Radwan to four years in prison for “spreading false news”. The verdicts of these courts cannot be appealed. The time they spent in pre-trial detention pending the original case (2019 #1356) will not count as time served for the December 2021 prison terms, and the verdict is final as it was then ratified by President Al-Sisi. More details here.

Preparations for COP27 are taking place against the backdrop of a persistent and deep-rooted human rights crisis in Egypt. Egyptian authorities have for years used draconian laws, including anti-terrorism, cybercrime and civil society laws, to stifle all forms of peaceful dissent and close civic space. Under the current government of President Abdel Fattah al-Sisi, thousands of people continue to be arbitrarily detained without legal basis, following grossly unfair trials, or solely for peacefully exercising their human rights. Thousands of people are being held in prolonged pre-trial detention on bogus terrorism and national security charges. Among those arbitrarily detained are dozens of journalists targeted for their media work, social media users punished for sharing critical content online, women convicted of morality charges for making Tik Tok videos and members of religious minorities accused of blasphemy. Prisoners are held in conditions of detention that violate the absolute prohibition on torture and other ill-treatment, and since President Abdel Fattah al-Sisi came to power, hundreds of people have died in custody amid reports of denial of health care and other abuses. Egypt remains one of the world’s leading executioners, executing 107 people in 2020 and 83 in 2021, with at least 356 people sentenced to death in 2021, many after grossly unfair trials, including by courts of law. ’emergency. The impunity crisis has encouraged Egyptian security forces to carry out extrajudicial and other unlawful executions, enforced disappearances and torture without fear of consequences.