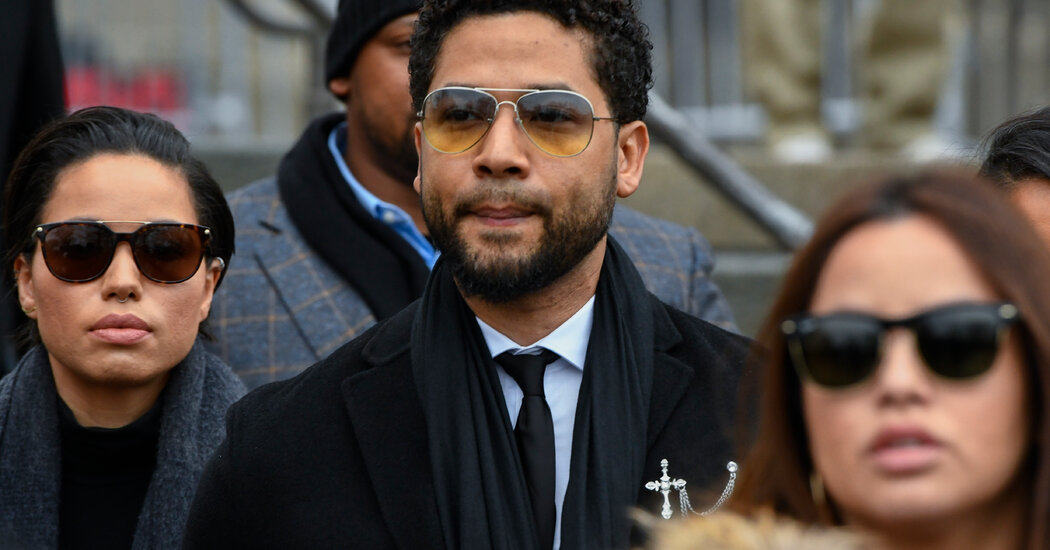 Ahead of Jussie Smollett sentencing, his supporters ask for ‘mercy’

Ahead of a sentencing hearing on Thursday, celebrities and racial justice advocates like Samuel L. Jackson and his wife, actress LaTanya Richardson Jackson; Reverend Jesse Jackson; and Derrick Johnson, the president of the NAACP, have written letters asking for clemency for Jussie Smollett, the actor convicted of falsely claiming to have been the victim of a racist and homophobic attack.

“Jussie has suffered before,” Reverend Jackson wrote to the judge handling the case. “He was excoriated and reviled in the court of public opinion. His professional reputation was badly damaged.

Mr Smollett, 39, was found guilty of criminal disorderly conduct – punishable by a maximum of three years in prison – relating to conversations he had with police immediately after reporting the attack. But defendants convicted of similar crimes in the past have been sentenced to probation and community service.

Numerous letters cite Mr. Smollett’s history of pro bono work, the non-violent nature of his offense and the reputational damage he had already suffered following accusations that the 2019 attack was in fact a prank he had planned to advertise. Others who have written on her behalf include actress Alfre Woodard and Melina Abdullah, founder of Black Lives Matter in Los Angeles.

During the trial, the prosecution argued that Mr Smollett ordered two brothers, Abimbola Osundairo and Olabinjo Osundairo, to attack him near his apartment building in Chicago, shouting racist and homophobic slurs at him, punching him quite hard to create only a bruise and place a rope around the neck like a noose. Both brothers testified against him, acknowledging their role in the incident, which they said was staged. The actor himself spoke for seven hours of testimony over two days to deny playing any role.

Prosecutors did not say whether they would seek jail time during the hearing.

“It is the judge who has total and exclusive power to impose a sentence,” said Daniel K. Webb, the special prosecutor who handled the case.

At the start of Thursday’s proceedings, Judge James B. Linn is expected to rule on a motion from lawyers for Mr. Smollett, who is best known for his role in the hip-hop drama ‘Empire’, seeking to have the conviction thrown out . or for the actor to get a new trial.

In documents filed with the court last month, the lawyers argued that Judge Linn displayed a “hostile attitude” towards the defense and acted inappropriately when the defense tried to present evidence that the one of the brothers had made homophobic statements and that the attack on Mr Smollett, who is gay, could have been motivated by prejudice.

In their motion, defense attorneys cited a case in which Judge Linn called a series of questions about a homophobic comment by Olabinjo Osundairo “very collateral issues.”

The defense argued that this comment could have swayed the jury and that the line of questioning was central to their argument that the Osundairo brothers had carried out a ‘genuine attack’ on Mr Smollett ‘motivated by homophobia’. (During his testimony, Olabinjo Osundairo repeatedly denied being homophobic.)

During the trial, Judge Linn denied the defense’s request for a mistrial at the time, defending his use of the term “warranty” as merely referring to matters outside the direct facts of Ms. .Smollett.

As part of their bid for a new trial, the defense also argued that when selecting the jury, prosecutors used to seek to dismiss potential black jurors – which resulted in a final group including a black juror and a black alternate.

Prosecutors argued in court papers that the accusation of discrimination during jury selection was unfounded and that they had provided “racially neutral” explanations to challenge the inclusion of those jurors.

Mr. Smollett’s sentencing options also include restitution, which in his case would likely mean paying the city of Chicago for the money it spent investigating his hate crime report.

In a pre-sentencing court filing, a city attorney and the superintendent of the Chicago Police Department urged prosecutors to ask the court to order Mr. Smollett to pay them more than $130,000, explaining that the police had “worked around the clock” to find the perpetrators of the attack.

“The city is a victim of Mr. Smollett’s crimes because his false reports caused the CPD to expend scarce resources that could have been devoted to solving real crimes,” the filing said. The city currently has an ongoing lawsuit against Mr Smollett in which they have sought the same amount of money.

In their letter to Judge Linn, Samuel L. Jackson and LaTanya Richardson Jackson said they had known Mr. Smollett since he was a child and later through charities. The Jacksons asked Judge Linn for ‘mercy’ and argued that Mr Smollett ‘used his fame to impact community outreach work’, including helping the people of Flint, Michigan during the water crisis.

In his letter, the Reverend Jesse Jackson wrote that he was concerned for Mr Smollett’s safety in prison as a ‘well-known, non-violent, black, gay man of Jewish descent’.

When deciding on sentencing, the court will consider Mr. Smollett’s criminal history, which involves a single 2007 incident in California. He was convicted in that case of driving under the influence, driving without a license and misreporting to the police, all misdemeanors. Mr Smollett was sentenced to probation and community service and had to undergo drug treatment, according to a pre-sentence report written by a probation officer and filed with the court.

The report was based on an interview with Mr Smollett after his sentencing, in which the actor said he suffered from ‘excessive stress’, faced financial problems and asked to follow a drug treatment for a few years. Mr Smollett told the probation officer he hoped to continue to lead.

The actor, who was released from prison on bail, generally refused to discuss the details of his case during the interview with the probation officer. But when asked how his family reacted to the ordeal, he replied: “They know me and they know I didn’t do this.”

When asked if he planned to stay in his apartment in New York, Mr Smollet replied: “It’s all up in the air right now.”