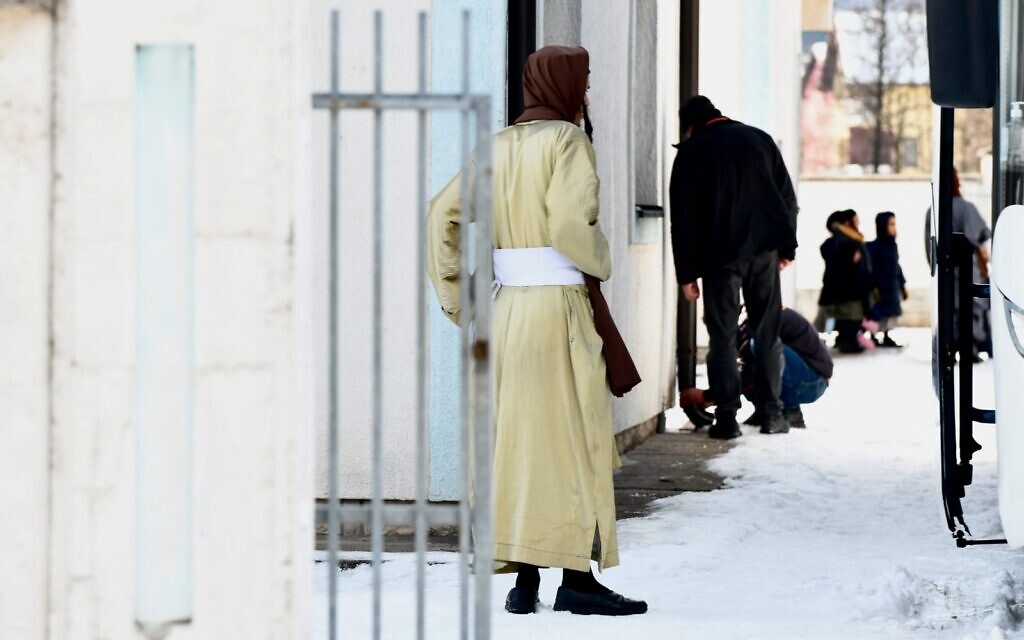 NEW YORK – Two prominent members of the extremist Jewish sect Lev Tahor have been extradited from Guatemala to the United States to face prosecution in a child abduction case that has ensnared much of the group’s leadership.

The Shmiel brothers and Yakev Weingarten were extradited last month and arraigned before a US federal judge in New York on April 22.

The couple appeared before Judge Nelson S. Roman in U.S. District Court in White Plains, New York, last week. They are being held at the nearby Westchester County Jail.

They insisted on representing themselves at trial, instead of using a court-appointed lawyer, despite the judge’s repeated warnings that it was ‘unwise’ because neither of them has any legal training or experience. They asked for laptops in prison, in order to prepare their defense, recently released court documents show.

The Weingartens face a slew of charges of international kidnapping, conspiracy, unlawful identification and coercion of a minor.

They face a maximum sentence of life imprisonment.

Another of their relatives, Yoil Weingarten, is still being held in Guatemala, awaiting extradition to the United States. The cult moved to Guatemala after fleeing authorities and government surveillance in Canada. Local reports this week, Guatemalan authorities approved his extradition.

Two other defendants in the case, the Matityau brothers and Mordechay Malka, had a hearing last week and is due in court on Wednesday. The Malkas were already incarcerated in the United States.

Last month, the court sentenced cult leader Nachman Helbrans to 12 years in prison on six convictions, including child sexual exploitation and kidnapping. Another defendant in the case, Mayer Rosner, received the same sentence.

The case stems from the kidnapping of two siblings from a New York home in 2018.

Around 2017, Helbrans had arranged for the girl, his niece, to be “married” to an adult in the group. The girl was married to the man when she was 13 and he was 19, although they were never legally married as such a union would have been illegal in Guatemala and the United States.

The couple “immediately commenced a sexual relationship for the purpose of procreation,” consistent with the group’s usual practice, the US Department of Justice said in a statement last year.

The girl’s mother escaped the group’s compound in Guatemala in 2018, fearing for the safety of her children, and fled to the United States. A Brooklyn court granted him sole custody of the children and barred their father, a Lev Tahor executive, from communicating with them.

Helbrans and Rosner then devised a plan to return the then 14-year-old girl to her then 20-year-old husband. In December 2018, they kidnapped her and her 12-year-old brother from their mother in the upstate New York village of Woodridge. They smuggled the children across the US border into Mexico to reunite the girl with her adult “husband”.

The children were recovered from Mexico and the kidnappers arrested, after a three-week search involving hundreds of law enforcement personnel, and returned to New York.

Three months later, Lev Tahor allegedly tried to kidnap the girl a second time. During that incident, Matityau Malka approached the girl in Brooklyn on several occasions and gave her cell phones to communicate with the kidnappers, according to court documents.

The girl reportedly used the phones to communicate with Yakev Weingarten, who led the community after Helbrans was incarcerated. The new documents claim that Matityau Malka was in contact with Helbrans while he was in prison at this time.

Yakev Weingarten also threatened the mother around the same time and Helbrans threatened her with jail in March 2019, according to a US attorney’s document filed with the Justice Department and dated Sunday.

The mother is Helbrans’ sister and has pleaded for leniency towards him, saying she has forgiven him and he needs counseling and treatment, not punishment.

Matityau Malka also visited Helbrans in prison on several occasions before the March 2019 kidnapping attempt, according to court documents.

In March 2021, another unnamed co-conspirator again approached the miners in New York in an attempt to evict them from their home again. The suspect had bus tickets to Georgia, cell phones, children’s clothes and fraudulent birth certificates, according to court documents. The suspect returned to Guatemala later that month.

The defendants claim that the mother wrongfully abducted the children from the Lev Tahor community, that they were trying to save them and that they face religious persecution.

An opposition group, Lev Tahor Survivors, put the number of cult members at between 300 and 350 people. The group is currently dispersed, with some members in Guatemala, and others in Macedonia and the United States.

A member of the opposition group told The Times of Israel he believes Lev Tahor is being led by around 15 to 20 “aggressors,” and the rest are being held mostly against their will.

Lev Tahor, an ultra-Orthodox extremist sect, was founded by Helbrans’ father, Rabbi Shlomo Helbrans, in Jerusalem in the 1980s. The group fled to Canada, then to Guatemala in 2014, after making the under scrutiny by Canadian authorities for allegations of child abuse and child marriage.

Young Helbrans took over the reins of the band in 2017, when his father drowned in Mexico under mysterious circumstances.

Lev Tahor’s movements, machinations and plans are all obscure. Several dozen members of the group have rebounded in the Balkans in recent months. Some members of the anti-Zionist group sought political asylum in Iran in 2018. Documents presented in US federal court in 2019 showed that the cult’s leaders had pledged allegiance to Iranian Supreme Leader Ayatollah Ali Khamenei.

The group has been described as a cult and as the “Jewish Taliban”, as women and girls over the age of 3 are required to dress in long black dresses covering their entire body, leaving only their faces exposed. Men spend most of their days praying and studying specific parts of the Torah. The group adheres to an extreme and idiosyncratic reading of kosher dietary laws.